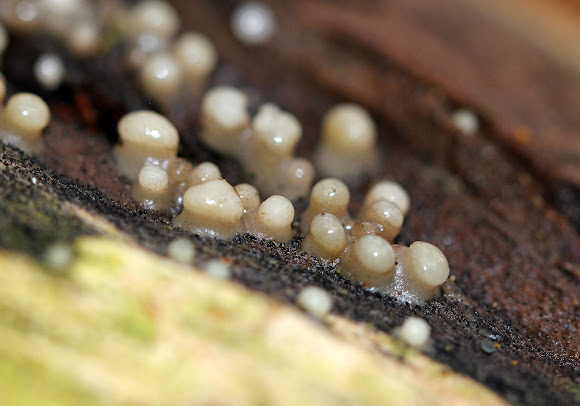 A beautiful and tiny example of Fungi Imperfecti, which are fungi for which a sexually reproductive stage of the life cycle has not been found. They are anamorphs and have only an asexual reproductive stage, lacking the teleomorph (fruiting body/sexual reproductive stage). Resembling a slime mold, they form small grayish white cushions on dead hardwood. Sizes ranged from 1-3mm. This is the first spotting of this species on Project Noah.

On a rotting log in a mixed, but mostly deciduous forest.

Thanks for your comments ForestDragon and flowntheloop. It was my first time seeing this fungus, and they were so small that I couldn't see any of the details until I got home and loaded them on my computer.

Awesome! I saw some of these on one of my recent hikes. My images didn't come out usable though. Next time! Thanks for sharing!

Congrats on the first-time spotting! These are so cool! <3