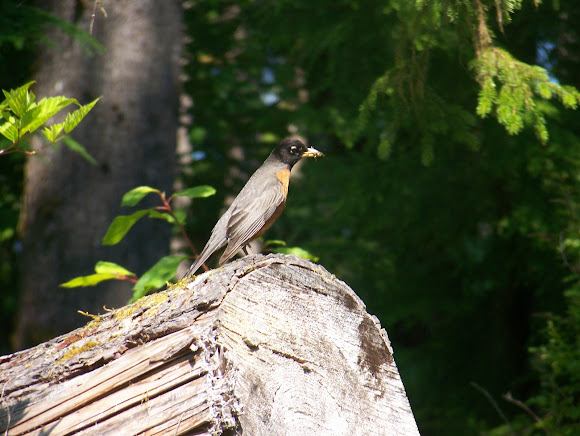 Black head, reddish-orange breast and grey feathers; I am 99 percent sure that it is a Turdus migratorius caurinus (Robin).

I found this robin in the Quinault Rainforest in the month of July 2012. "This bird breeds throughout most of North America, from Alaska and Canada southward to northern Florida and Mexico.[17] While Robins occasionally overwinter in the northern part of the United States and southern Canada,[13] most migrate to winter south of Canada from Florida and the Gulf Coast to central Mexico, as well as along the Pacific Coast.[17] Most depart south by the end of August and begin to return north in February and March (exact dates vary with latitude and climate). " "The American Robin's breeding habitat is woodland and more open farmland and urban areas."

If you look closely, you can see that it has a bug in its beak! :)