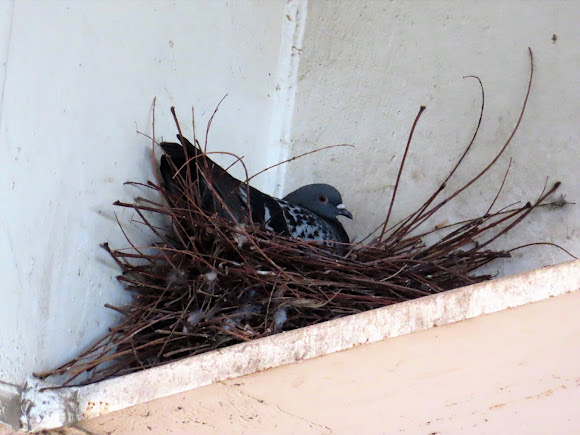 Adults are 29 to 37 cm long and have a wingspan of 62 to 72 cm. The weight of wild or feral rock pigeons ranges between 238 and 380 g. Their plumage is generally bluish-gray in color, darker on the head, neck and chest, where they also present green and purple iridescence. It is characterized by presenting two black bands and having a white rump. The lower coverts of their wings are whitish and the tips of the remiges are blackish. Its tail has a black band at the end topped with a thin white border. The irises of their eyes are orange, red or gold, and they have a thin blue-gray naked eye ring. Its beak is blackish and has a striking whitish wax on its upper part, and its legs are purple-red in color. The female is very similar to the male but the iridescence of her neck is less intense and more restricted to the sides and back, and her chest is less voluminous and darker. Juveniles are similar but with less luster.

Nesting under a bridge in the city of Valencia. Urban street pigeons are feral domestic pigeons, which over time regain their primitive form to a greater or lesser degree. Therefore, we can say that urban pigeons are the descendants of wild pigeons that were domesticated and later released.

Within the heat of the pigeons there is a soaring flight with wings held markedly elevated, and a boastful courtship above the ground, with a swollen iridescent chest, bowing before the female and emitting the typical coo. The female then builds a neglected nest, in the cavities of the walls, incubating both parents, the male regularly at noon. After 17 days of incubation, the chicks emerge, helpless, from the two eggs that they always lay. Depending on the atmospheric weather they are protected under the wings for one or two weeks.

eulalia rubio a month ago

Ava T-B a month ago

Lovely notes. What I admire most about pigeons is that they make Crop Milk to feed their babies. Flamingos do this too, and some penguins.
https://pigeonpedia.com/do-pigeons-produ...