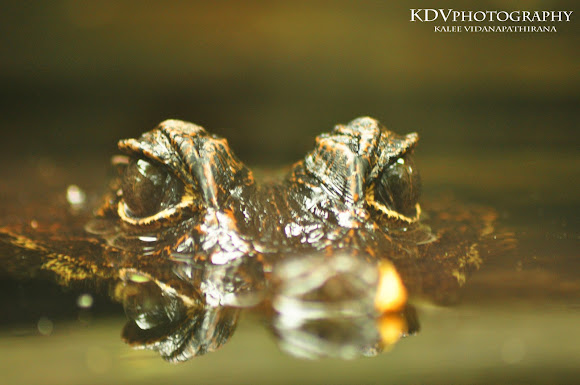 The dwarf crocodile (Osteolaemus tetraspis) is an African species of crocodile. It is also the smallest extant crocodile species in the world. Recent sampling has identified three genetically distinct populations. Some feel that the findings should elevate the subspecies to full species status. Dwarf crocodiles attain a medium adult length of 1.5 meters (5 feet), though the maximum recorded length for this species is 1.9 meters (6.2 feet). Adult specimens typically weigh between 18 and 32 kg (40 and 71 lb), with the largest females weighing up to 40 kg (88 lb) and the largest males weighing 80 kg (180 lb).[1][2] Adults are a uniform black on their backs and sides with a yellowish underside with black patches. Juveniles have a lighter brown banding on body and tails and yellow patterns on the head. As a result of its small size and heightened vulnerability to predation, this species of crocodile has a heavily armoured neck, back and tail and also has osteoderms on its belly and underside of neck. Osteolaemus has a blunt short snout, as long as it is wide, similar in fact to that of a dwarf caiman, probably a result of occupying a similar ecological niche. The dentition consists of 4 premaxillary teeth, 12 to 13 on the maxilla and 14 to 15 on the dentary bone. O. tetraspis has lighter colours, a more pointed, upturned snout and more body armour than O. osborni.

I took this photo at the National Zoological gardens at Dehiwala, Sri Lanka. The crocodile was in n small enclosure allowing me to get close and right down to the water level.

Dwarf crocodiles range across tropical lowland regions of sub-Saharan West Africa and West Central Africa. Such a distribution greatly overlaps with that of the slender-snouted crocodile, encompassing countries as far West as Senegal, reaching the Central African Republic in the East, and ranging as southerly as Angola. The subspecies O. t. tetraspis is found mainly in the westerly reaches of this range while O. t. osborni is restricted to the Democratic Republic of Congo's rain forest. Osteolaemus individuals reside in permanent ponds in swamps and areas of slight current of rain forest rivers, though reports exist of dwarf crocodiles in isolated pools in the savannah, where burrows are dug to aestivate during the dry season. The dwarf crocodile is a slow, timid, and mainly nocturnal reptile. As with all crocodilians, it is an adept predator of vertebrates, large invertebrates such as crustaceans and, when presented with the opportunity, also eats carrion. Foraging is mainly done in or near the water, though in areas with substantial ground cover, they may expand their feeding pattern to land in extensive forays, specially following rains.

wow, so happy to hear that. thank you for the news :-)

Hello! Your spotting here was featured as representative of this species from PN via a link http://species-spottings.tumblr.com/ (see SPOTTING column) from the recent blog post http://blog.projectnoah.org/post/4868890...

I love the eyes! Please consider my mission: http://www.projectnoah.org/missions/1696...

thanks for the points. yeah i'll add them.

Very nice photograph and lots of information. However each spotting should always include information about the spotting itself. General information on a species is available from Wikipedia, and EOL, and many other sites, and it's OK to include it but you could also put the link in the reference field. But what is NOT available is information about YOUR spotting. You are the only one who can provide that. In this case it is an African species taken in Sri Lanka. So please include details about where you took this (these) photo(s). Please include the name of any facility like a zoo. Put these details in "habitat". Thanks