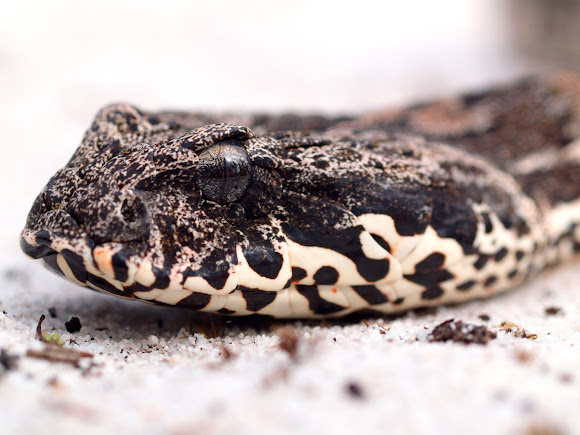 The Death Adder is one of Australia's most venomous snakes. Death adders are easily distinguishable from other snakes by the very short, squat bodies, rapidly tapering tail and the broad triangular head. Colouration varies widely but most species exhibit some form of banded pattern in shades of brown or grey. The tail tip is usually a different colour to the rest of the body, often brightly coloured and is used as a lure by wriggling it to attract potential prey. Adult death adders are rarely longer than a metre in length. Despite their short size they possess the longest fangs of any Australian snake.

Diet: Small mammals and birds are the primary diet, the snake lying in wait often for many days until a meal passes. This ambush hunting makes the death adder more of a threat to humans. Most other snakes will move away from the first sign of danger whereas death adders tend to sit tight and rely on their camouflage. A stray foot in the wrong place can lead to an extremely rapid strike (probably the fastest of all Australian snakes) and a serious bite. However, death adders really are reluctant to bite unless the threat is very close to them. The name death adder was probably originally 'deaf' adder referring to the inability of this and all other snakes to hear airborne sounds. Reproduction: Female death adders produce large litters of live babies in late summer. Over 30 young have been recorded in a single litter, though 10-20 is the norm.

Thanks S Frazier, the habitat this adde was found in was coastal heath, sandy with a lot of leaf litter.

Beautiful spotting! Can you tell us the specific habitat of your spotting? Thanks

Congratulations! Beautiful pictures. The sides of the head look like figures painted on a grecian pot.

Congratulations on this wonderful spot and SotD !

Awesome spot! Congrats! That is the coolest name ever!!! You're brave!

Congratulations, my daughter said that the snake is very beautiful, and it seems to many strings

Congratulations on your SOTD for this beautiful snake! The pattern is just amazing!

Thanks Leanne, have been looking for them for years, knowing the were in the area, but they are so well camoflaged.

Woohooo! Congratulations on your amazing spotting MacChristiansen. What a cool looking snake & fantastic photos. So happy for you :)

Congratulations Mac, this great portrait has been chosen as apotting of the day!


The Common death adder can deliver the fastest strike among all venomous snakes recorded in Australia, and its venom contains a powerful neurotoxin which can cause paralysis or even death.