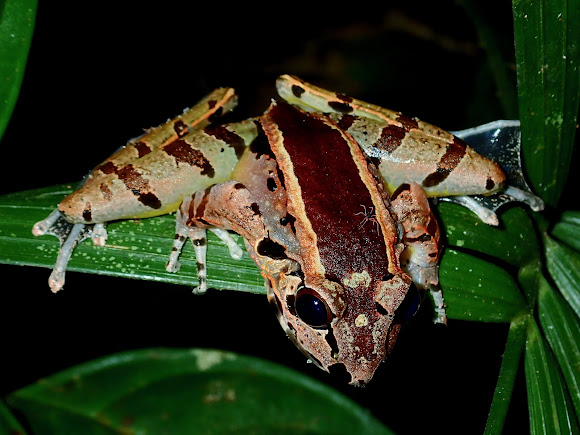 This Huia cavitympanum got its general name from the markings on top of its head as though it has a hole. Fairly large sized, this Frog is endemic to the island of Borneo. This Species is the only known species of Amphibians capable of emitting purely ultrasonic calls that are "structurally independent" rather than being harmonic elements of audible sounds (Arch et al. 2008). The only other vertebrate capable of emitting structurally independent ultrasonic sounds is the Blue-Throated Hummingbird, (Lapornis clemenciae; Pytte et al. 2004).

Pic#2 close-up shows a Tick/Mite on the back of the Frog.

Interesting fact about the ultrasonic call!

Thanks, @Sukanya :D
I personally doesn't know too what it means by 'structurally independent', was looking up the ID and reading up about them and find the info interesting, so was just 'quoting' it with references :D, cool info though :)

The Hole-in -the-head frog left me with a gaping mouth.
I am not sure what "structurally independent" means but ultrasonic signalling...Wow!!
Thanks, AlbertKang I have learnt something new today.
SOTD material for sure....good luck!