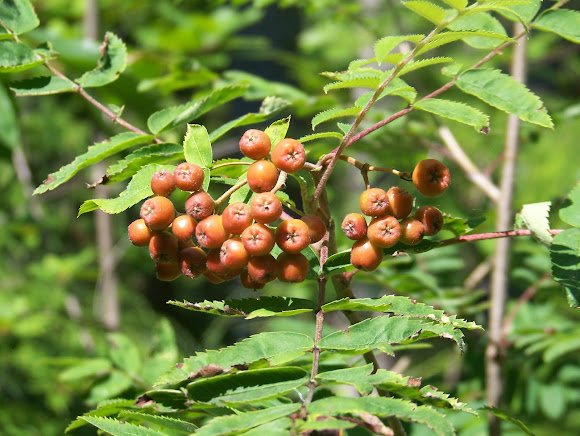 It has clusters of red berries and leaves are serrated. "The Mountain ash tree is a small to medium fruit tree that grows up to 50 feet tall. It has a light grayish bark and an oval, open head at maturity. It produces clusters of white flowers in spring followed by bright, long-lasting, clustered orange-red berries in fall that attract birds. The deciduous leaves are toothed and pinnately compound. They are dark, dull green in summer and yellow to reddish in fall. Not a true Ash tree, the Mountain Ash is more closely related to the cherry tree, in the rose family."

A google picture search led me to the name of this plant. I'm fairly certain I've correctly identified the plant. I took the picture on a hike at Lake Quinault. The fruit of Sorbus aucuparia has been tested in scientific research. The extracts of its fruit, the rowan berry, were screened for their effectiveness against human cervical cancer (HeLa) cells. Although it was not the most effective out of the berries tested, the rowan was proven effective. It reduced the viability to < 50% of control at 50 μg/mL. It reduced the growth of the HeLa cell. [16] Ultimately, this is proving that rowan berries have antiproliferative agents that can slow down the process of growing cervical cancer cells. The Sorbus Aucuparia is also known as the rowan, mountain-ash, wittern,whitty, wiggen, and quickbeam. It is believed to have protective magical powers against different kinds of witchcraft. This was a common belief in Britain. Rowan twigs were placed over the bed in Lancashire to give a person peaceful sleep. In some places, such as North Yorkshire, people made "witch wood" out of rowan twigs and placed them above beds and doorways to ward off witches. In the United Kingdom, where it is often known as the wiggen tree, the Mountain Ash has traditionally been used as an anti-witching device.