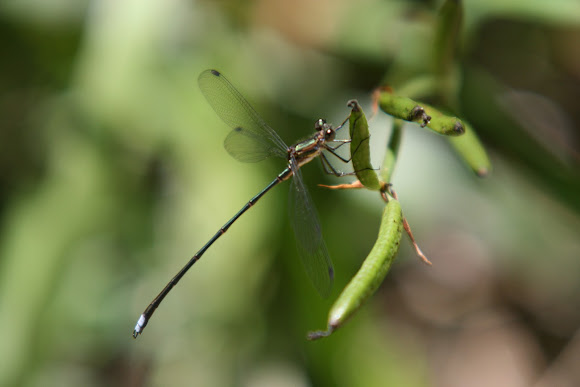 It is known commonly as the Emerald Damselfly or Common Spreadwing. Both males and females have a metallic green colour and when resting its wings are usually half opened

One of the larger damselflies, this species is most common in July and August. It is often found by ponds and lakes, and is very rarely seen along flowing water. Emerald Damselflies like to perch among reeds, their colour providing good camouflage. They are not as strong fliers when compared to other common damselflies such as the Common Blue or Large Red Damselflies, but they are more likely to be seen on misty, rainy days then those species. When disturbed they usually do not fly very far away, landing on another perch a few yards away. Their habit of perching with their wings half open is characteristic of the family Lestidae and gives rise to their other common name of spreadwings. A population can consist of several hundred insects.

Thanks Maria, only my second time shooting dragon flies. Still surprises me how beautiful they are!!

Thanks Very much Ali!!