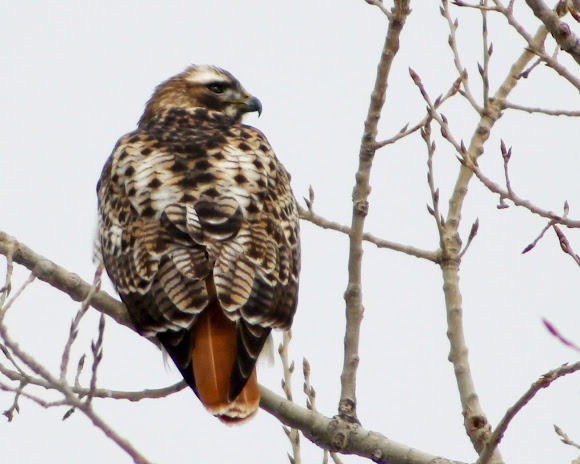 Red-tailed Hawks are large hawks with typical Buteo proportions: very broad, rounded wings and a short, wide tail. Most Red-tailed Hawks are rich brown above and pale below, with a streaked belly and, on the wing underside, a dark bar between shoulder and wrist. The tail is usually pale below and cinnamon-red above, though in young birds it’s brown and banded. “Dark-phase” birds are all chocolate-brown with a warm red tail. “Rufous-phase” birds are reddish-brown on the chest with a dark belly. This particular hawk had an abundance of white and light feathers on her top side which was a treat to see!

This hawk and her mate caught my eye from quite a distance. The pair let me approach very closely. The female (or larger of the two) had incredibly beautiful light colored plumage on her back and wings, which you can see well in the first picture. (My second picture doesn't do it justice!) I wasn't sure if this was her natural coloring or if her feathers had been sun bleached over the year. Either way, she was a stunning hawk! She eventually took off, to show off her beautiful caramel coloring on her underside. She was a stunning hawk and I named her "Snow Hawk" because of her light coloring and the several inches of snow that covered the ground below her!

Thanks for the advise on the bird feeders Marybeth! I am super jealous of your Golden Eagle spotting! I have yet to see a wild one (Only ones we release back into the wild.)

Good luck baldy hunting! If you have an Audubon Society in your state or a local birding group check to see where their sightings are. Rural areas with lakes and rivers are always a good place to look. We have year-round bald eagle residents here in CO but also get an influx of them that winter here. Not sure how it is in DE! Good luck!

LOL Emily I know it sounds awful cuz I do get upset when someone smaller on the food chain leaves my backyard and it has taken me quite some time to accept the whole "circle of life" notion, but now that I have, my two passions are my hawks and my hummers. I have been lucky enough to have all of the hawk species that are local to me (Cooper's, Sharp Shinned, Red Tailed and Red Shouldered) become very frequent, sometimes daily, visitors to my backyard and I love it! I was even lucky enough to have a Golden Eagle for a fleeting moment, just long enough to snap 2 quick pics. My next mission is a Bald Eagle!! Oh and FYI, if you're adding feeders, I have 15 feeders of all kinds spread through out my backyard, there's no room for any more LOL Happy New Year!!!!

Brody, hawks, especially Red-tailed hawks are one of my favorite subjects to observe and photograph. Red-tails have SO many variations and subspecies, I just can't get enough of them!

Marybeth, you are are girl after my own heart! I like little birds, don't get me wrong, but I've considered putting out feeders just in hopes of attracting some Cooper's and Sharp-shinned hawks! Ha!

And thank you Cheryl for the kind words!

Amazing pictures!! She is absolutely gorgeous! I have become obsessed with hawks, my friends laugh when they see all my feeders in my yard saying I must not like bird watching I like hawk watching better because I am providing them with a perfect buffet...so goes the circle of life.

You got a wonderful picture! I love hawks, aren't they so pretty?

Thanks Christy! I'm kind of in love with her! I wish her territory was closer to me so I would have more chances to see her! ;)

Wonderful! She is gorgeous! Great captures!

Thank you all so much for the kind words! I still can't get over what a gorgeous hawk she was! I will be on the look out for her now!

Wow she is the prettiest red-tail I have ever seen! Love her light colors. Great photos!