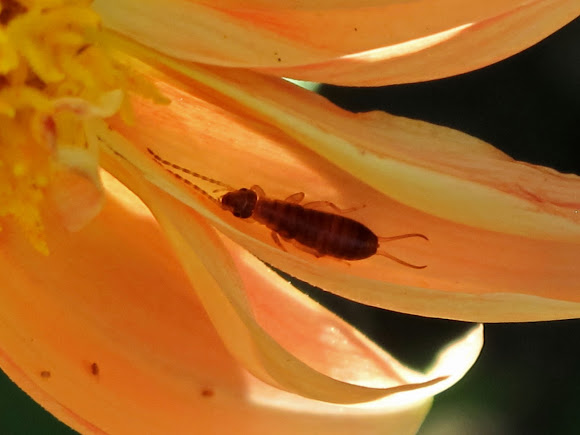 Spotted this baby earwig sitting on a Dahlia petal in the garden.Slender, flattened insects with flexible telescpoic abdomen and two long slightly curved spines at rear end that function like forceps. Has wings concealed under wing covers but seldom flies. (The 3 New Zealand native species are flightless). The wings are a large fan shape and are folded in several pleats then folded crosswise and then tucked under very small hard wing covers with only the tips protruding.

Earwigs like damp confined spaces such as behind the bark of tree, under fallen logs and stones and between the the young leaves of palms and similar plants. Common in gardens during summer where it is a pest damaging vegetables and flowers especially fond of the dahlias, roses and foxgloves in my garden. Earwigs are nocturnal and overwinter underground. They are omnivorous feeding on a wide range of plant or animal material preying on smaller insects.

First recorded in New Zealand in 1898. The Maori name for earwig is hiore kakati. Females lay eggs in burrows remaining with them till they hatch. Frequently licking them and gathering them together if they wander. The baby earwigs look like the adults with no egg, larva, pupa, adult stages.