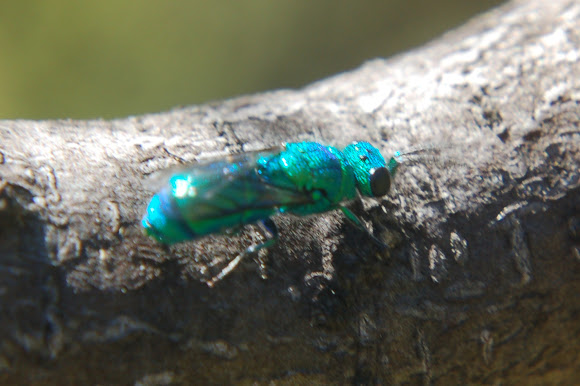 Possible Chrysis sp (Hymenoptera Chrysididae)
Previously thought to be Corynura chloris.
I had never seen these bees before, that morning I saw two of those flying around far away and thought it would be nice take a closer look, but they flew immaterially. Later this bee landed just next to me in that branch.

Thanks Dane and Krossculture.
@Ashish Cuckoo Wasp was my first guess, but as I couldn't find images or clear reference of iridescent Cuckoo wasps in Chile, but many of the green bee Corynura chloris.
Due to to your comment, looked deeper in to the subject. Upon further reading, the abdomen shape of the C. loris bee is flatter, plus the hind legs have much more hairs (to carry pollen) and I've found a couple of pictures of a Chrysis sp. that can be found on the area and resembles much more this spotting.

Can be a Cuckoo Wasp.