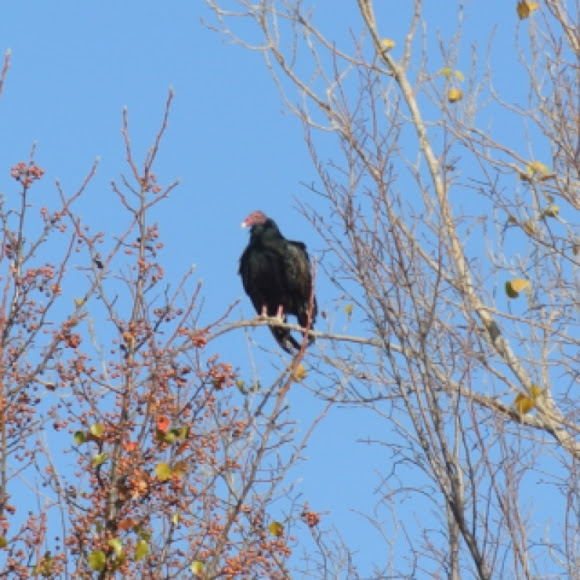 Turkey Vultures are large birds a little more than two feet in length with a wingspan of six feet. They often live as long as 20 years, and some have lived beyond thirty. Males and females are almost identical in appearance. They weigh as much as six pounds.

This one was perched in a tree overlooking part of the Lake Lewisville shoreline.

Turkey vultures are related to the stork, not to birds of prey. They can travel up to 322 kilometers (200 miles) in a day. They have an extremely acute sense of smell that helps them locate food. If cornered by a human or animal that is perceived as threatening, the turkey vulture may roll over and play dead, or project offensive smelling vomit as a defense. They are a very gentle and non-aggressive bird, and even though their primary diet is the flesh of dead animals, they do not kill their prey. Lacking strength in their tiny grasping claw, turkey vultures are the only scavenger birds that can't kill their prey. They are one of natures greatest recyclers, sanitizers, and road cleaners. They eat the rotten and sometimes diseased flesh of animals that have died from natural causes, been hit by a car, or succumbed to disease. Amazingly their digestive systems are able to digest diseased and rotten flesh, and have the unique ability to kill any virus and bacteria in the food they eat. Their droppings are not only disease free but also a natural sanitizer.