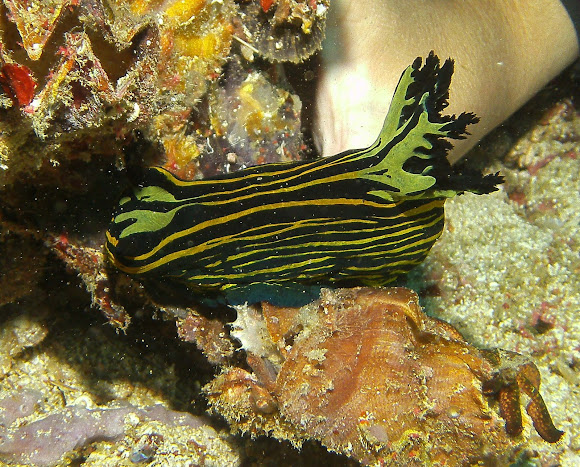 Roboastra luteolineata is a species of sea slug, a polycerid nudibranch, a marine gastropod mollusc in the family Polyceridae. Roboastra luteolineata is quite large in comparison to most other sea-slugs (to 6 cm (2 1/4 in.)). It is black, with yellow lines running lengthwise down the body. It can be distinguished from other similar-looking nudibranchs by the light green patches on the top of the head between its rhinophores. It is a fast-moving species. Feeds on other nudibranchs, actively hunting them out.

This species occurs in the tropical Indo-Pacific Ocean. It has been observed as far north as Japan in the Northern Hemisphere and as far south as the Poor Knights Islands in New Zealand in the Southern Hemisphere.

Thanks, Maria. Malapascua was great to see nudis, they are colorful and huge!