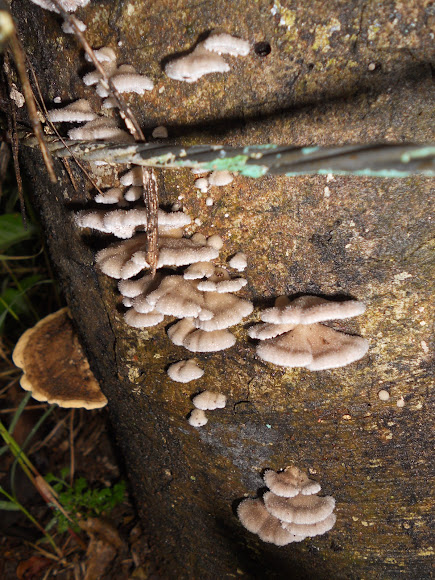 Schizophyllum commune is easily recognized. Its tiny fruiting bodies lack stems, and they attach themselves like tiny bracket fungi on the dead wood of deciduous trees. Unlike a bracket fungus, however, Schizophyllum commune has what appear to be gills on its underside, rather than pores or a simple, flat surface. On close inspection the "gills" turn out to be merely folds in the undersurface--and they are very distinctively "split" or "doubled. Fruiting Body: 1-5 cm wide; fan-shaped when attached to the side of the log; irregular to shell-shaped when attached above or below; upper surface covered with small hairs, dry, white to grayish or tan; under surface composed of gill-like folds that are split down the middle, whitish to grayish; without a stem; flesh tough, leathery, pallid.

Ecology: Saprobic on dead wood or occasionally parasitic on living wood; growing alone or, more frequently, gregariously to clustered; on decaying hardwood sticks and logs (even on planks and boards); year-round (it survives by shriveling up and waiting for more moisture); widely distributed in North America and throughout the world.