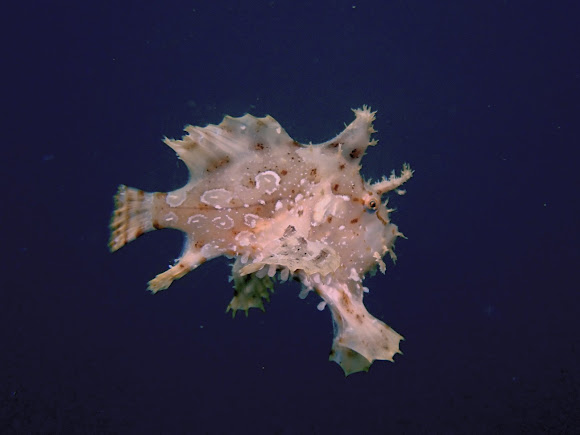 Sargassum Frogfish is a species of Frogfish that lives among Sargassum weeds that floats near/at the surface of tropical oceans. They are ambush predators, using their amazing camouflage with the Sargassum seaweeds host to hunt fish and crustaceans that may hang around the Sargassum weeds for protection. This was a special find for me, found 2 of them within close proximity. Was diving with 3 professional/serious underwater photographers on that day and they have been wanting to see this rare Critter for a long time, and they finally get to see and take picture of this one.

Found almost exclusively among Sargassum seaweeds near/at the surface of tropical oceans. In recent times, they have also been seen among thrash/garbage floating at the ocean surface such as plastic wrappers and debris. Occasionally, they can also be found floating in the water column when moving/transferring to different host materials.

A few interesting facts about this Sargassum Frogfish - Histrio histrio 1. Its scientific name is a Tautonyms, meaning its genus name and species name is of the same word. 2. Only one species was known/described under the genus, Histrio.

Thanks, @triggsturnet for your kind words and appreciation :)

Great photos and notes as always Albert. Thank you for sharing this.

Thanks, @Lauren.
I hope you find them, ask Daniel to look for them :D

Very cool. We are having a very bad year for Sargassum in the Caribbean and eastern Mexican coastline. Next time we snorkel near any of it, I'll look for the little fish.