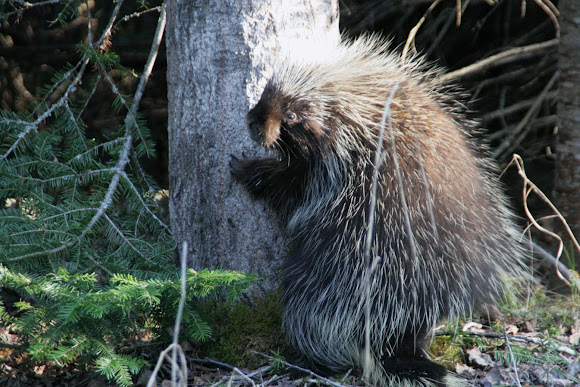 Stout, walks slowly with a waddle, probably in no rush thanks to its hundreds of protective sharp quills. A large rodent, probably just a bit smaller than a beaver.

Spotted in a foresty provincial park in Northern Ontario. Found in coniferous and mixed forests in Canada and northern&eastern parts of the States.

As it walked, it also made a fairly loud "woooop woooop" sound.

not that I'm scared, I just try to respect the ones that live in the woods that I walk in. I'd give them a hug if it wern't for those quills!

thankyou thankyou! it was the first time i saw one in the wild, and i admit, it captured my heart. it was just so casual with its walk, and i found the noises it makes just adorable. but i can see why it can be intimidating -- those quills!

Such lovely rodents, I see them when hiking through the bush around my area and the are always kinda scared and run up a tree, but the thing is if you don't see them and get close to them Look out! Luckily i always spot them and stay a little clear from them. Very funny noises when they spot me out in the wild, kinda scares Me at first, maybe that's the warning.

thankyou and thankyou! it was the first time i've seen a porcupine in the wild, and i've never heard that sound before either. it was quite cute. ))

Excellent spotting ! Very interesting about the sound it made too.