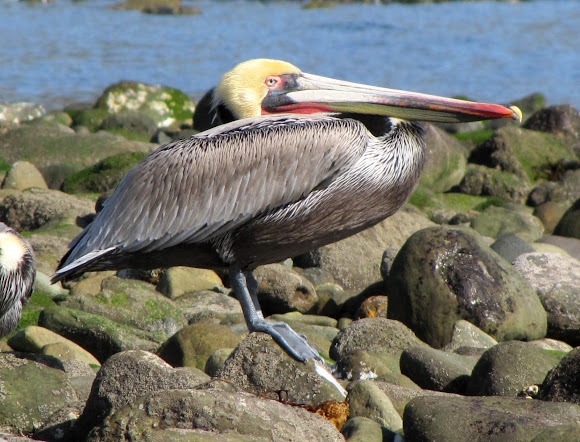 According to Wikipedia, the Brown Pelican is the smallest of the eight species of pelican, although it is a large bird in nearly every other regard. It is 106–137 cm (42–54 in) in length, weighs from 2.75 to 5.5 kg (6.1 to 12 lb) and has a wingspan from 1.83 to 2.5 m (6.0 to 8.2 ft). Through most of its range, the brown pelican is an unmistakable bird. Like all pelicans, this species has a very large bill, 28 to 34.8 cm (11 to 13.7 in) long in this case, with a gular pouch on the bottom for draining water when it scoops out prey.The head is white but often gets a yellowish wash in adult birds. The bill is grayish overall in most birds, though breeding birds become reddish on the underside of the throat. The back, rump, and tail are streaked with gray and dark brown, sometimes with a rusty hue. In adult pelicans, the breast and belly are a blackish-brown and the legs and feet are black. The juvenile is similar but has a brownish-gray neck and white underparts. This bird is readily distinguished from the American White Pelican by its non-white plumage, smaller size and its habit of diving for fish from the air, as opposed to co-operative fishing from the surface. The Peruvian Pelican, previously considered a subspecies of Brown Pelican, is now considered to be a separate species. It has very similar plumage to the Brown, but it is noticeably larger. The Brown and Peruvian pelicans may overlap in some areas along the Pacific coast of South America.

Pesticides like DDT and dieldrin threatened the Brown Pelican's future in the southeast United States and California in the early 1970s. Pesticides also threatened the pelican population in Florida in this period. A research group from the University of Tampa headed by Dr. Ralph Schreiber conducted research in the Tampa Bay/St Petersburg area and found that DDT caused the pelican eggshells to be too thin and incapable of supporting the embryo to maturity. As a result of this research, DDT usage was eliminated in Florida, followed by the rest of the US. Along with the American White Pelican, the Brown Pelican is protected by the Migratory Bird Treaty Act of 1918. The International Union for Conservation of Nature's Red List has listed the Brown Pelican as Least Concern since 1988. The US government imposed a ban on the use of DDT in 1972. Since then, the population of Brown Pelican has increased. Current estimates place the population at 650,000 individuals

I did Hema, it was so wonderful to view them at suck close proximity !

Love these .Did you see them plunge dive? My husband had to pull me away.

I get to like your photos all over again!

Thank you Carol, Bee, Ava and Seema, and Thank you Stian for the ID !

Great pictures. Thanks for sharing. Here in SD we only get White Pelicans as they come through. Rarely Brown ones. Its fun to see them.

I love pelicans because they look so animated and fun. What a great series! Enjoying your photos very much!