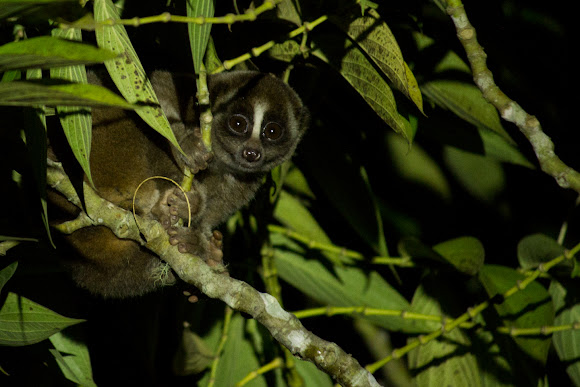 These incredible nocturnal primates are too cute for their own good - listed as Vulnerable on the IUCN Red List, mostly due to the illegal pet trade. Since they have a toxic bite (rare for mammals), their teeth are removed before they are sold, often resulting in infection and loss of life. They rarely live long once in captivity. Keep them wild!

Check out these great videos from the Little Fireface Project. http://www.youtube.com/watch?v=QxvfhLRqM... http://www.youtube.com/watch?v=IWTNhCTjE... From Wikipedia: According to the 2008 International Union for Conservation of Nature (IUCN) Red List assessment, the Sunda slow loris was evaluated as "Vulnerable". In June 2007 it was transferred from CITES Appendix II to Appendix I, indicating a true concern about the state of international trade in this species, an act now forbidden by international law. It is also protected by Indonesian law, though the law does not seem to be strictly enforced. Its population size is unknown and further studies need to be carried out to confirm their conservation status. Removing or clipping slow loris teeth can lead to infection and death. The Sunda slow loris is greatly threatened by the pet trade, and is sold as an exotic pet throughout southeast Asia. The slow lorises are the most commonly traded protected primates in southeast Asia. When sold as a pet it often will have its teeth pulled out to prevent injury to the owner. This may cause dental infections which have up to a 90% death rate. Once it has lost its teeth, reintroduction to the wild is impossible. Due to a very high mortality rate in captivity due to stress, improper nutrition and infection, the pet trade is inflated by replacements. With a greater purchasing power, the increasing human populations in the species' range could have an even more serious impact. The Sunda slow loris is further threatened by gathering for illegal traditional medicine. The fur is reported to heal wounds, the flesh to cure epilepsy, eyes are used in love potions, and the meat is reported to cure asthma and stomach problems. It is also killed as a crop pest.Severe habitat loss and degradation over large areas of its range have caused large population declines, even though the species is more adaptable to anthropogenic habitats than other primates in the region. The resulting fragmentation has restricted species dispersal as it depends on continuous canopy cover to move from tree to tree.

Beautiful primate. Thanks luke for sharing.

Thanks for sharing your images of the Sunda Slow Loris in the wild luke.mackin! Your spotting has been chosen for Project Noah Fact of the day: "Sadly, cuteness can be a curse. The Sunda Slow Loris is one of the most threatened primates on earth. This nocturnal tree dweller of tropical rainforests is classified as “Vulnerable” by the IUCN (International Union for Conservation of Nature), and is threatened by the illegal pet trade and by habitat destruction. It is also threatened by gathering for illegal traditional medicine. Because the Slow Loris has a toxic bite, when sold as pet its teeth are pulled out, causing dental infections and often death. Check out the Little Fireface Project, a long-running loris conservation Project in South and Southeast Asia: https://www.facebook.com/LittleFirefaceP...

what a gorgeous little Loris!

That sounds awesome luke, lucky to live so close. I am planning a trip to Indo this coming winter but was going to skip Sumatra because I had already been there but now I'm thinking twice. Are you on facebook? Can we connect and talk about a possible visit? Thanks.

Thanks! I've taken maybe 5 night drives/walks up to this area, and have seen slow lorises twice there. Civets *every* time. And a tiger once! It's only about a 40 minute drive up into the mountains behind my house, which is pretty great.

What an incredible encounter !

How amazing to see such a terrific creature in the wild!

I hope this cute primate has a chance of survival. Thanks for sharing Luke.

There is a great documentary about slow Loris in Java. I downloaded it as a torrent. It's called Natural World - Jungle gremlins of Java. I think it was a BBC documentary though I could be wrong. Definitely from UK tv.

Great spotting. Nice to see it in its natural surrounding rather than in a cage as you so often see them in Indonesia.

And the situation continues to get worse for them, unfortunately. According to this article, 90% have been wiped out.
http://abcnews.go.com/blogs/technology/2...