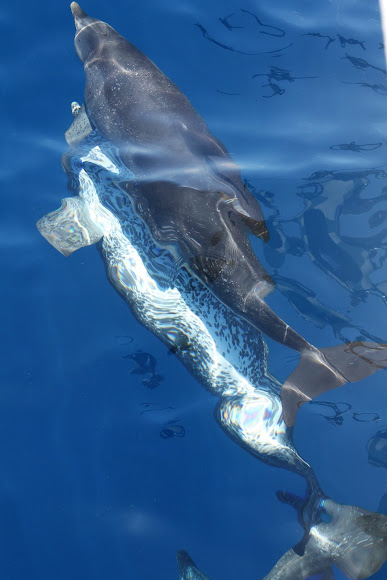 Atlantic spotted dolphins can grow from 5-7 feet long and can weigh up to 300 lbs. They are found in the Atlantic Gulf Stream and adults are known to have more spotted skin coloration than dolphins under 1 yrs old. They are considered acrobatic swimmers and have been known to surf on waves made from large sea vessels.

The Atlantic spotted dolphin can be found in the temperate and tropical areas of the Atlantic. They are known to travel in groups of 50 to 200. They eat small fish, invertebrates, squid and octopuses.

What a special encounter on our Pelagic birding trip. We traveled 40-60 miles out to the Atlantic shelf. Once there, the primary mission of the ship Capt., Michael Brothers, was to release two baby sea turtles from the Marine Science Center in Ponce Inlet, Florida.

Thank you AntónioGinjaGinja. It is an honor to be nominated.