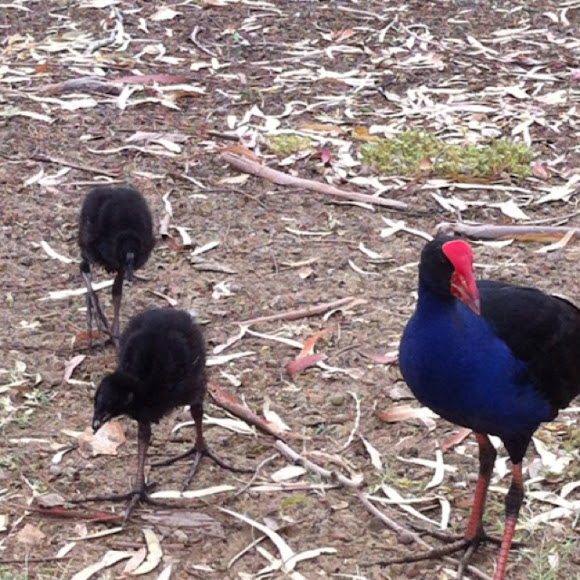 The Purple Swamphen is a large rail. It is mainly dusky black above, with a broad dark blue collar, and dark blue to purple below. As the Purple Swamphen walks, it flicks its tail up and down, revealing its white undertail. The bill is red and robust, and the legs and feet orange-red. For such a bulky bird, the Swamphen is an accomplished flier and will readily take to the air to escape danger. In flight, the long legs and elongated toes trail behind or hang underneath the body. Purple Swamphens are proficient swimmers, but prefer to wander on the edges of the water, among reeds and on floating vegetation. Size range: 44 - 48 cm

Observed at the Old Port Reach Reserve (Grange, Adelaide, South Australia) not far from Charles Sturt's Cottage. This is generally a slow moving water way with patches of reeds here and there, very close to Grange Primary School and busy Jetty St situated in suburban Adelaide. Habitat: The Purple Swamphen is found around freshwater swamps, streams and marshes. Distribution: Purple Swamphens are common throughout eastern and northern Australia, with a separate subspecies common in the extreme south-west of the continent. Birds have transported themselves from Australia to New Guinea and New Zealand and throughout the islands of the south-west Pacific. It has been suggested that the New Zealand population of Purple Swamphens (locally called the Pukeko) originated in Australia.

Feeding: The diet of the Purple Swamphen includes the soft shoots of reeds and rushes and small animals, such as frogs and snails. However, it is a reputed egg stealer and will also eat ducklings when it can catch them. The Purple Swamphen uses its long toes to grasp food while eating. Communication: A loud, penetrating 'kee-ow', as well as some softer clucking between members of a group while feeding. Breeding: Purple Swamphens are generally found in small groups and studies have shown that these consist of more males than females. More than one male will mate with a single female. All family members, and occasionally the young from a previous brood, share in incubation and care of the young. The nest consists of a platform of trampled reeds with the surrounding vegetation sometimes being used to form a shelter. Often two broods will be raised in a year. Information came from: http://australianmuseum.net.au/Purple-Sw... And http://www.birdsinbackyards.net/species/...

They are pretty looking! I also quite like the colour variations round the world :-)

Wow, so pretty with the purple. We don't have that variation here.

I hadn't seen the chicks before either, it was quite a job for me to get same usable photos as I had my 2 year old with me and I was cracking up. They looks so funny and cute at the same time :-)

I've never seen the swamphen chicks before. Obviously they grow into their feet. A great series, Sarah.

Thanks for the advice Daniele, doing it right now :-)

Nice series Sarah! Great observation about the feet! Under Habitat, as per our guidelines could you please describe the habitat where you saw the birds rather than generic information about the species? Thanks in advance!

They had four babies this season :-) such small bodies but the feet are almost the same size as the parents :-)

How lovely! You got babies too :)

Love the feet and color!