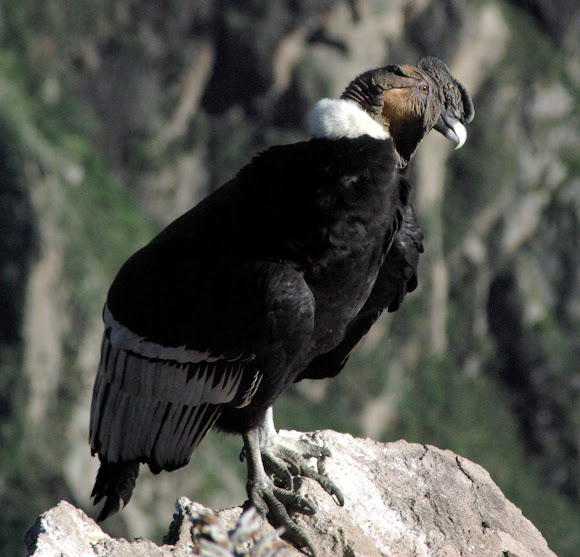 It is a large black vulture with a ruff of white feathers surrounding the base of the neck and, especially in the male, large white patches on the wings. The head and neck are nearly featherless, and are a dull red color, which may flush and therefore change color in response to the bird's emotional state. In the male, there is a wattle on the neck and a large, dark red comb or caruncle on the crown of the head. Unlike most birds of prey, the male is larger than the female. The condor is primarily a scavenger, feeding on carrion. It prefers large carcasses, such as those of deer or cattle. It reaches sexual maturity at five or six years of age and nests at elevations of up to 5,000 m (16,000 ft), generally on inaccessible rock ledges. One or two eggs are usually laid. It is one of the world's longest-living birds, with a lifespan of up to 100 years old in captivity. (en.wikipedia.org)

There's a site in the Colca Canyon named El Cruz del Condor (The cross of the condor). Between 7 am and 9 am there is a very realistic chance you will see Andean condors circling this site. There were at least a dozen perched on the side of the cliff the day I visited.

gracias! thank you everybody!

Added it to the notes section Maria dB!

Great spotting! Can you tell us something about how you came to see it?