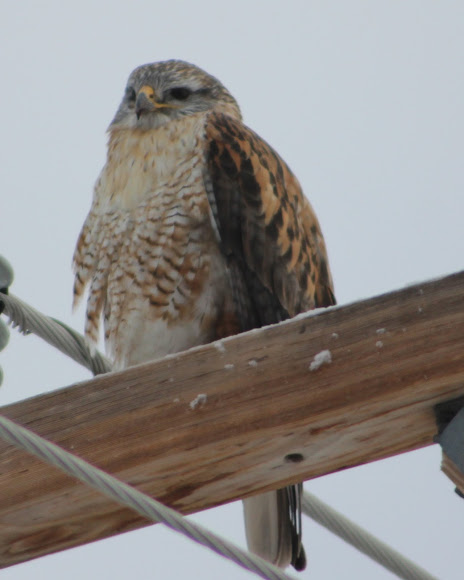 The male and female have identical markings. The main difference is size, with the female being larger. Perched birds have a white breast and body with dark legs. The back and wings are a brownish rust color. The head is white with a dark streak extending behind the eye. The wing tips almost reach the tip of the tail. The underside is primarily light colored with the dark legs forming a "V" shape. The reddish upper-back color extends to the inner wing coverts or "shoulders." The primary remiges (pinions) are dark gray with conspicuous light "windows" in the inner primaries. Three prominent light areas on the upper surface stand out as two "windows" on the outer wings and a rufous rump mark. The underwings are whitish overall with rufous markings, particularly in the patagial area. This gives a smudgy appearance to the wings, but less dark than in a Red-tailed Hawk. Dark "comma"-shaped markings are prominent at the wrists. The juveniles are lighter and don't get the rufous coloring until later in life. The Ferruginous Hawk is one of the only two hawks that have feathers that cover their legs down to their toes, like the Golden Eagle. The other is the Rough-legged Hawk. In flight, these birds soar with their wings in a dihedral.

It was a cold and overcast morning. This small Ferruginous Hawk was fluffed up trying to stay warm.

He was the one we thought was a red-tailed hawk! :)