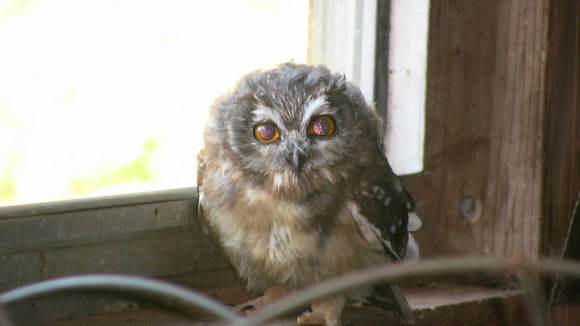 Northern Saw-whet Owl (baby) "The Northern Saw-whet Owl is a very small, short-bodied, Owl with a relatively short tail. The overly large head has no ear tufts and may appear distorted due to an asymmetrical skull. They look small when perched and tend to shuffle their feet, but in flight appear larger because of their broad wings. The facial disk has brownish and whitish radials around the edge, which fade to a whitish area around the eyes. There is also a dark area from the base of the bill to the bottom inside edge of each eye. The rest of the head is brownish to grey-brown and densely covered with white streaks, especially on the forehead. The eyes are large and bright yellow-orange. The bill is black. Plumage is quite fluffy and brownish or reddish brown overall streaked with white underneath and spotted on the back. Flight feathers are spotted white. The legs and feet are light buff and heavily feathered. The toes are lightly feathered and the claws are dark horn with blackish tips."

"Northern Saw-whet Owls inhabit coniferous and deciduous forests, with thickets of second-growth or shrubs. They occur mainly in forests with deciduous trees, where woodpeckers create cavities for nest sites"