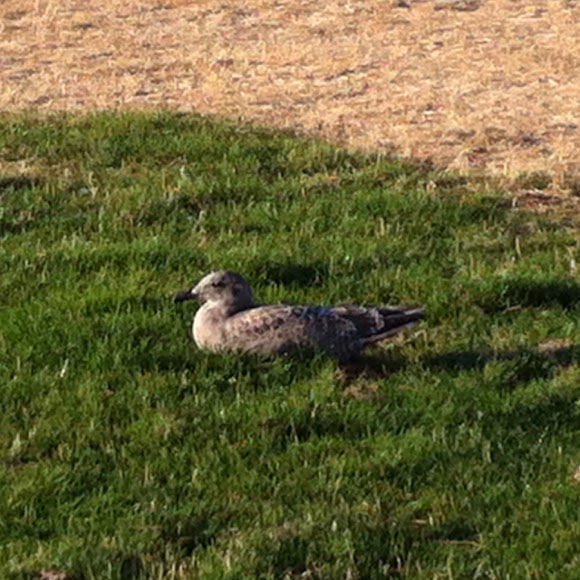 Park by the ocean in a city

Saw this gull in the Olympic Sculpture Park in Seattle. It had found this dent in the ground and didn't really want to move out of it, but as we got closer and closer trying to take a picture of it, it eventually decided to run away.

Thank you for the interesting discussion! I am still an amateur at bird watching. The book I have on Seattle birds does not include details/pictures for identifying juvenile birds.

As Liam said, primaries are too dark for a Glaucous-wing or Glaucous-wing hybrid. The bill looks too short and the head looks too cute and finely structured for a Herring, leaving Western as the best match.

Lesser Black-backed Gull would be a rare find on the West coast. Before anyone criticizes me for saying that, I will clarify that it does not mean it's not possible, just much less likely.
Juvenile gulls are always tough, but particularly on the Northwest coast, where it is said around half of the population are hybrids (particularly "Olympic" Gull, Glaucous-winged x Western).
That said, I personally think the primaries are too dark for Olympic or Glaucous/-winged. Herring or Western would be my inclination, more so Western with the amount of white on the tertials.

Sarah, the mission rules are not clear about only posting animals when they are flying. Besides, I think Karen ask you to let these kind of corrections to the Rangers.

Again this bird is not flying so it should not be in Global Flight mission.