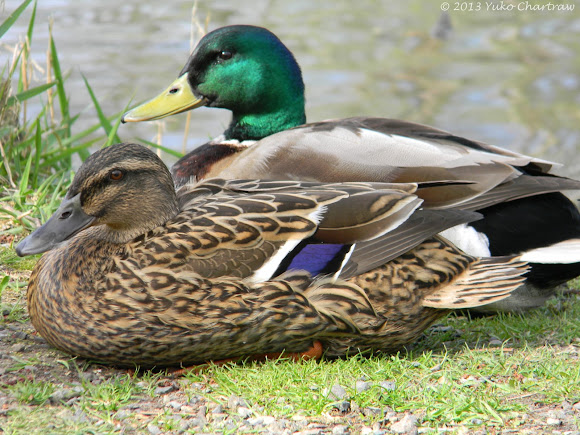 The Mallard is a medium-sized waterfowl species although is often slightly heavier than most other dabbling ducks. The breeding male Mallard is unmistakable, with a glossy bottle-green head and white collar which demarcates the head from the purple-tinged brown breast, grey brown wings, and a pale grey belly. The rear of the male is black, with the dark tail having white borders. The bill of the male is a yellowish orange tipped with black while that of the female is generally darker ranging from black to mottled orange. The female Mallard is predominantly mottled with each individual feather showing sharp contrast from buff to very dark brown, a coloration shared by most female dabbling ducks, and has buff cheeks, eyebrow, throat and neck with a darker crown and eye-stripe. (From Wikepedia)

The Mallard is widely distributed across the Northern Hemisphere, North America from southern and central Alaska to Mexico, the Hawaiian Islands, and across Eurasia, from Iceland and southern Greenland and parts of Morocco (North Africa) in the west, Scandinavia to the north, and to Siberia, Japan, and China in the east. It is strongly migratory in the northern parts of its breeding range, and winters farther south. For example, in North America it winters south to Mexico, but also regularly strays into Central America and the Caribbean between September and May. The Mallard inhabits a wide range of habitat and climates, from Arctic Tundra to subtropical regions. It is found in both fresh- and salt-water wetlands, including parks, small ponds, rivers, lakes and estuaries, as well as shallow inlets and open sea within sight of the coastline. (From Wikipedia)

Mallards usually form pairs (in October and November) only until the female lays eggs at the start of nesting season which is around the beginning of spring, at which time she is left by the male who joins up with other males to await the molting period which begins in June. (From Wikipedia) This pair was together everywhere they went/swam. Very cute!

Thank you Daniele and Hemma for your comments!

lovely , Yuko! as lovely as Possum.

Beautiful series of this pair!

Some gorgeous ducks there, Yuko!