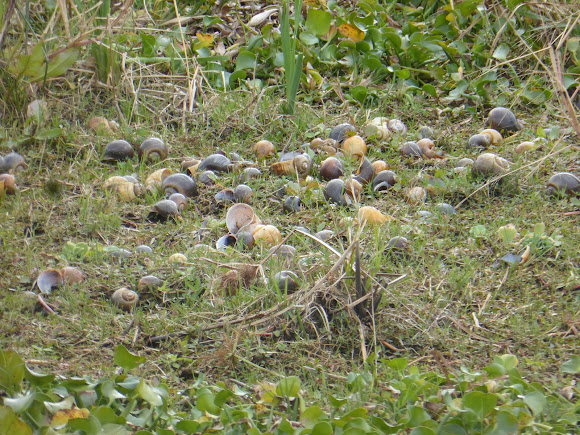 Many apple snails and their eggs were at this park. The trail was mostly flooded out, so there was probably a boom in apple snails thanks to all the water. The pink eggs were on many of the plants just over the water line. There were two snail kites and a couple dozen limpkins feasting on the snails in just one small portion of the park. The discarded shells were all over the place, as the limpkins and snail kites subsist mostly on apple snails. In the last photo, you can see a limpkin grabbing one with its beak.

Unfortunately, there are several invasive apple snail species in Florida and only one native one, this being one of the invasives based on the eggs (see reference link) though I can't 100% rule out Pomacea canaliculata, Channeled Applesnail (also invasive). There also could be more than one species present here. Regardless, it it pretty amazing to consider that not only one, but two bird species' diets consist mostly of these snails.

Thanks Neil! It was really amazing to see the amount that these birds could eat! And thank you as well Sukanya! I have more pictures of the limpkins and a video too https://www.projectnoah.org/spottings/13...

Excellent spotting and photos, Machi. Wonderful notes too. I love the effort you've put into it. They're decent-sized snails. Just add some garlic..... ?