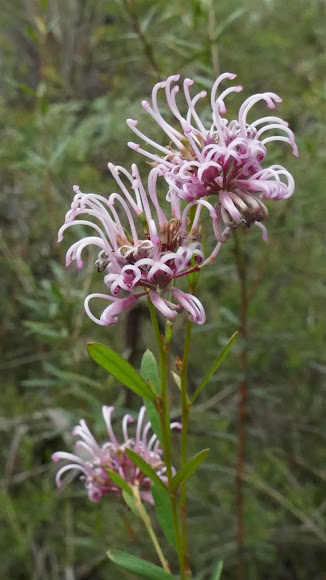 Grevillea sericea, commonly known as the pink spider flower, but also pink midget and silky grevillea, is an Australian native species of the family Proteaceae, and is endemic to NSW. There are two subspecies (see notes). It grows as a shrub upwards of 2 metres tall. Flowers are usually white to pink, and as with other Grevillea species, they occur in an inflorescence of many flowers, set to appear in November. It is a very hardy bushland species.

Dense native bushland on the Girrakool Loop walking track, Girrakool National Park, NSW Central Coast. Sandy soils but lots of leaf litter, mostly dry area, sunny aspect. Close to Piles Creek and tributaries that flow for most of the year, and would be torrents during heavy rainfall. Area prone to dense fog during the cooler months.

Thank you, gents, for the congrats. Much appreciated :)

Great spotting Neil,perfect,congrats on the SOTD and thanks for sharing

Beautiful flower, great comments; thanks and congrats for SOTD

Wow. Thanks, Daniele. I haven't been far away, just a little preoccupied with other stuff. I really appreciate the SOTD. Australian wildflowers look totally insane. When I feel a little frazzled, nature reminds me it's more than OK to look a little frazzled. This grevillea proves my point, Thanks again :)

Welcome back Neil and congratulations on this perfectly documented and filled in spotting! It is our Spotting of the Day:

"With the Northern Hemisphere being hit by a serious bout of winter, its a pleasure to drastically change season and have this Pink Spider Flower (Grevillea sericea ssp. sericea) as our Spotting of the Day! This Australian native belongs to the family Proteaceae, and is endemic to New South Wales. Proteaceae are predominantly distributed to the Southern Hemisphere, with Australia and South Africa having the greatest diversity of these plants. Together with Grevillea, the family includes other well known genera of garden flowers such as Banksia and Leucadendron. Macadamia integrifolia and its delicious nuts also belong to Proteaceae".