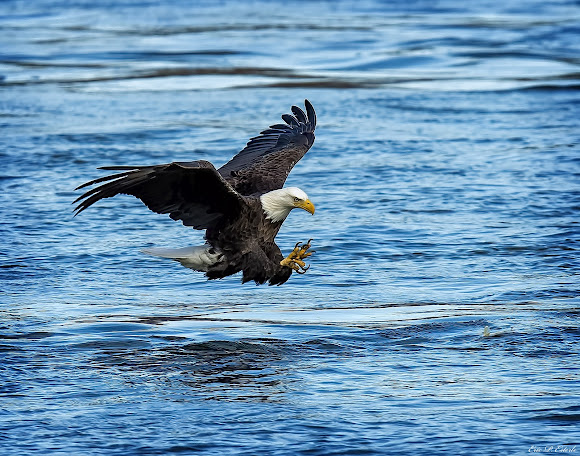 An majestic Bald Eagle picks up and carries out an early dinner on the Susquehanna river in late November 2012.

Per Wikipedia: http://en.wikipedia.org/wiki/Bald_Eagle Most of North America, including parts of Canada, all of the continental United States, and northern Mexico. The Bald Eagle prefers habitats near seacoasts, rivers, large lakes, oceans, and other large bodies of open water with an abundance of fish. Studies have shown a preference for bodies of water with a circumference greater than 11 km (7 mi), and lakes with an area greater than 10 square kilometers (4 sq mi) are optimal for breeding Bald Eagles.

...And welcome to Project Noah!

Congratulations on your first spotting!

WOW!! Spectacular!! Great photographs and great spotting.
And to top it all a SOTD on your first spotting on Project Noah... I will be following ...for sure!!

Awesome!
U should put it on the missions: Birds of the World, and Global Flight!

Congrats on your Spotting of the Day award, and welcome to Project Noah. I look forward to seeing much more from you in the weeks, months, and years to come. Thanks for sharing. I will assume your into quality captures just like I am. May you be blessed with more as you share them with others.

This spectacular spotting could go in the Hunters and Animal Feeding Behavior mission at http://www.projectnoah.org/missions/8463...

Extra congratulations to that!!! Well done!!!

Congratulations Eric! Your very first spotting on Project Noah has earned you spotting of the day!

The bald eagle is not really bald. "Bald" is from an old English word meaning white. Bald eagles do not attain their white head and tail feathers until their 5th year.