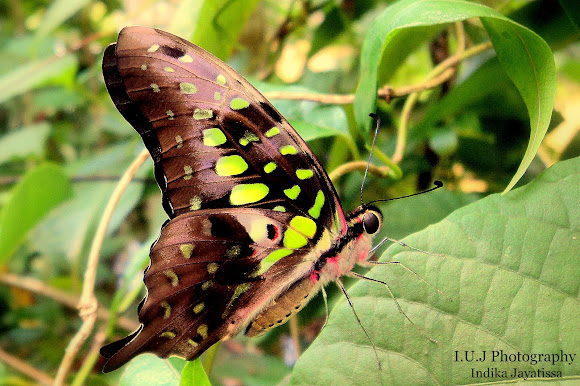 Male upperside black. Forewing with the following green markings: a spot at the extreme base of the costal margin, a transverse short bar near base of cell and seven spots beyond, two and two except the apical spot which is single ; two spots beyond apex of cell; a spot at base of interspaces 1a and 1, followed by two oblique short macular bands; a discal series of spots decreasing in size towards the costa, and a postdiscal series of smaller spots that begins with two in interspace 1; the spots in interspace 7 in both series are out of line, placed outwards. Hind wing: three series of similarly-coloured markings that ran transversely across the wing more or less parallel to the dorsal margin, the upper markings (those in interspace 7) white; a short greenish stripe at the extreme base of the wing. Underside: fuliginous brown or brownish-black, more or less suffused with pink along the costal margin, on apical area and along the outer margin of the discal markings on the fore wing, broadly along the dorsal and terminal margins and at base on interspaces 6 and 7 on the hind wing; markings similar to those on the upperside but less clearly defined and somewhat more grey in tint. Hind wing black, inwardly red-margined spots superposed on the pink area in interspaces 6 and 7. cilia very narrow, pale pink. Antennae, head, thorax and abdomen black, thorax above and the abdomen on the sides streaked with greenish grey; beneath: ochreous grey touched on the thorax with pink.[2] Female similar, but with a streak of greenish white along the dorsal margin on both upper and under sides.[2] Race decoratus is found in the Andaman and Nicobar Islands and is very similar to the typical form, from which it can be distinguished as follows : Upperside green spots smaller, especially the discal series on the fore wing. Underside hind wing : the red postcostal spot is relatively small but the red part has much increased against the black part; besides the large red anal mark and the mark before the first disco-cellular veinlet, there is a large red spot in the lower median cellule [interspace 2], a smaller red spot in each of the three preceding cellules [interspaces 3, 4, 5] and a streak-like spot at the base of the lower median cellule.[2]

Once found primarily close to wooded country where there is a fairly heavy rainfall, the Tailed Jay is now very common at low elevations and regularly seen in gardens and urban areas due to its foodplant, Polyalthia longifolia (False Ashoka or Mast Tree), being widely used as an ornamental tree.