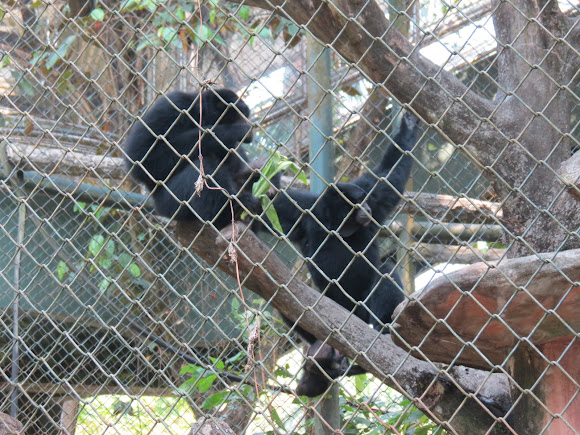 Siamang is a species from Hylobatidae. All species of Hylobatidae occur in tropical forest in South East Asia. They mostly locomote by brachiating. As an adaptation of completely arboreal life, they have arms that longer than their legs. They are also monogamous and thus have a defined territory that they protect actively. But recent study shows that siamang might be not fully monogamous. Siamang is distributed on Sumatra and Peninsular Malaysia. Siamang has the most complex duet song structure among other gibbons. Although these individuals are in captivity, they keep duetting every morning because they consider their cage as their territory. This family of siamang gibbons consists of one adult male, one adult female, and one newborn juvenile (I don't know whether it is male or female). If you look at the picture carefully, you can find out that one of the juvenile's eye is somehow deformed.

The video is a 9-minute documentation of siamang duet song. Duet song of siamang gibbons can be divided into 4 sequences: grunting sequence, introductory sequence, great call, and interlude sequence. Just like human song, they also have intro :D I think the grunting sequence is analogue to tuning musical instruments before playing an opus.