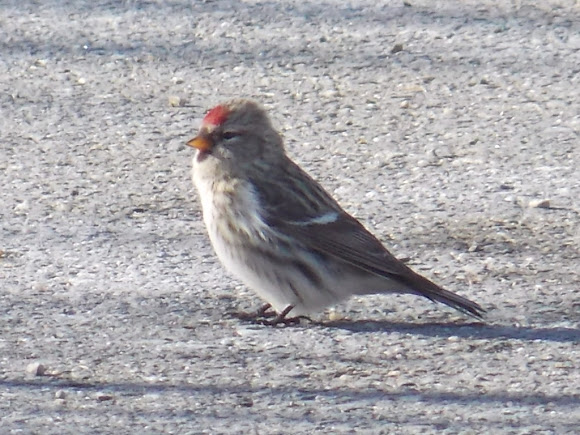 The Common Redpoll (Carduelis flammea) is a species in the finch family. It breeds somewhat further south than the Arctic Redpoll, also in habitats with thickets or shrubs. Nominate C. f. flammea (Mealy Redpoll) breeds across the northern parts of North America and Eurasia. There is also an Icelandic subspecies, Icelandic Redpoll (C. f. islandica), and one that breeds in Greenland and Baffin Island called the Greenland Redpoll (C. f. rostrata). Together the Iceland and Greenland forms are sometimes known as "Northwestern Redpolls". All forms migrate south into Canada, northern USA, or Eurasia. These birds are remarkably resistant to cold temperatures and winter movements are mainly driven by the availability of food. The common redpoll is smaller, browner and more streaked than the Arctic Redpoll. There are two distinct populations (one lighter, one darker) united in islandica, the relationships of which are unresolved.

This is the first time I have seen this species.