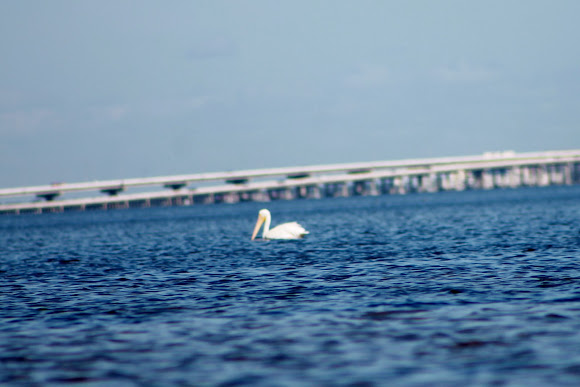 The American White Pelican rivals the Trumpeter Swan as the longest bird native to North America. Both very large and plump, it has an overall length is about 50–70 in (130–180 cm), courtesy of the huge beak which measures 11.3–15.2 in (290–390 mm) in males and 10.3–14.2 in (260–360 mm) in females. It has a wingspan of about 95–120 in (240–300 cm).[3] The species also has the second largest average wingspan of any North American bird, after the California Condor. Body weight can range between 9.2 and 30 lb (4.2 and 14 kg),[4] although typically these birds average between 11 and 20 lb (5.0 and 9.1 kg). Among standard measurements, the wing chord measures 20–26.7 in (51–68 cm) and the tarsus measures 3.9–5.4 in (9.9–14 cm) long.[5] The plumage is almost entirely bright white, except the black primary and secondary remiges, which are hardly visible except in flight. From early spring until after breeding has finished in mid-late summer, the breast feathers have a yellowish hue. After moulting into the eclipse plumage, the upper head often has a grey hue, as blackish feathers grow between the small wispy white crest.[2] The bill is huge and flat on the top, with a large throat sac below, and, in the breeding season, is vivid orange in color as is the iris, the bare skin around the eye, and the feet. In the breeding season, there is a laterally flattened "horn" on the upper bill, located about one-third the bill's length behind the tip. This is the only one of the eight species of pelican to have a bill "horn". The horn is shed after the birds have mated and laid their eggs. Outside of the breeding season the bare parts become duller in color, with the naked facial skin yellow and the bill, pouch, and feet an orangy-flesh color.[2] Apart from the difference in size, males and females look exactly alike. Immature birds have light grey plumage with darker brownish nape and remiges. Their bare parts are dull grey. Chicks are naked at first, then grow white down feathers all over, before moulting to the immature pluma

American White Pelicans nest in colonies of several hundred pairs on islands in remote brackish and freshwater lakes of inland North America. The most northerly nesting colony can be found on islands in the rapids of the Slave River between Fort Fitzgerald, Alberta and Fort Smith, Northwest Territories. About 10-20% of the population uses Gunnison Island in the Great Basin's Great Salt Lake as a nesting ground. The southernmost colonies are in southwestern Ontario and northeastern California.[6] Wild American White Pelicans may live for more than 16 years. In captivity, the record lifespan stands at over 34 years.[2]

This guy was all by himself and pretty far out in the bay, we watched him for a while, just floating along and catching fish without diving into the water, at least from our perspective it appears he was just scooping fish up by the mouthful, without ever leaving the water