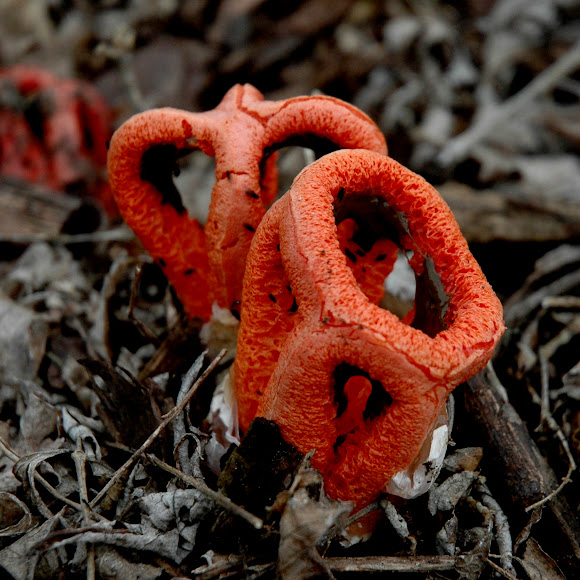 the fruiting body, known as the receptaculum, starts out as a subterranean "egg" form. As the fungus develops, the receptaculum expands and erupts out of the protective volva, ultimately developing into mature structures characterized by two to five long vertical orange or red spongy columns, joined together at the apex. The fully grown receptaculum reaches heights of 8 cm (3.1 in) tall. The inside surfaces of the columns are covered with a fetid olive-brown spore-containing slime, which attracts flies and other insects that help disseminate the spores. Although once considered undesirable, the fungus is listed as edible. It is found commonly in mulch. — Wikipedia

C. columnatus is saprobic, and uses extracellular digestion to acquire nutrients from dead and decaying organic matter, like wood. As a consequence of its predilection for dead wood, the fungus is often associated with disturbed habitats. It can often be found growing in and around gardens and residences where areas of cultivation or landscaping have resulted in accumulations of mulch, wood chips or other cellulose-rich materials. The mycelial cords can be traced to buried roots, stumps, and other woody material. The species grows in sandy soil, near woody debris, in lawns, gardens, and cultivated soil. Fruit bodies appear singly, or scattered, and can arise in the summer, autumn, and early winter, especially after wet weather. — Wikipedia

“Your spotting has been nominated for the Spotting of the Week. The winner will be chosen by the Project Noah Rangers based on a combination of factors including: uniqueness of the shot, status of the organism (for example, rare or endangered), quality of the information provided in the habitat and description sections. There is a subjective element, of course; the spotting with the highest number of Ranger votes is chosen. Congratulations on being nominated!”

P.S. the habitat field should describe the area in which you found your specimen. ;-)