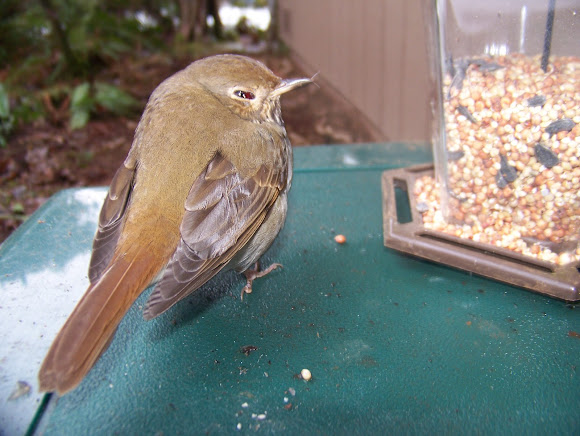 Small brown bird, about three to four inches long. "The Hermit Thrush has the white-dark-white underwing pattern characteristic of Catharus thrushes. Adults are mainly brown on the upperparts, with reddish tails. The underparts are white with dark spots on the breast and grey or brownish flanks. They have pink legs and a white eye ring. Birds in the east are more olive-brown on the upperparts; western birds are more grey-brown."

I always see these birds in the shrubbery outside the window. The cats catch them often because they're always low to the ground and not very fast moving. :( "Their breeding habitat is coniferous or mixed woods across Canada, Alaska, and the northeastern and western United States. They make a cup nest on the ground or relatively low in a tree. Hermit Thrushes migrate to wintering grounds in the southern United States and south to Central America but some remain in northern coastal US states and southern Ontario. Although they usually only breed in forests, Hermit Thrushes will sometimes winter in parks and wooded suburban neighbourhoods. They are very rare vagrants to western Europe. It has also occurred as a vagrant in northeast Asia. They forage on the forest floor, also in trees or shrubs, mainly eating insects and berries."

At first, I thought it might have been a brown creeper and then a house wren -- thanks to some help in ID, I'm pretty sure it's a Hermit Thrush. Plus, the music it makes sounds just like the songs we hear in summer time. So eerie! Their songs are like something out of a storybook, completely magical. The poor bird flew into the window and hit the ground. I picked him up and he wasn't moving at first. Then he stood up, and I was able to hold him in my hands. He pooped in my hand, twice! lol and then he flew away. You can see that his eye is bleeding; I hope the little guy healed quickly.

Thank you for the information. :) It's nice to know more about the birds in my area.

Your question is also referred to in this article...http://www.psu.edu/dept/nkbiology/naturetrail/winter/winterbirds.htm

I believe the reason for birds doing less singing in winter is because there is no need to, they are not trying to attract a mate

Really? They don't sing in the winter? Do you know why? Very curious ... I know very little about the birds in this area, but lately, I'm wanting to know everything ... part of why I joined this site...

plus they don't sing in the winter :)

I should read wikipedia carefully. It says, "but some remain in northern coastal US states". Perhaps, this bird was one of the "some" that remained. Still, I never hear that eerie song in winter time. Strange.

Hmm, still one more thing to puzzle out ... if this is the bird that I only hear in summer time (hermit thrush), then what was it doing hanging out at the house in January? Maybe I mislabeled the dates when I took theses photos ... hmm ... I should start keeping an eye on the birds outside, and see if I see any of these kinds creeping around in the bushes

I apologize for the incorrect ID. I was thinking more about the fact that it wasn't a Brown Creeper than actually looking at the birds features. A house wren would have sort of speckled striping throughout, yellow on the back part of it's lower bill, and the tail would be stubbier. Over all size would be smaller as well.

awww, his poor beak .. makes me so sad for him .. I think you are probably right, that he's a hermit thrush ... I googled the sounds they make ... and it sounds just like that eerie chirping we hear in summer time, I always wanted to know what bird was making that music! ... we never hear it in winter though, which makes sense, since they migrate, right?

I believe you are correct with the wren, definitely not a Brown Creeper

I'm pretty sure it's a house wren, yeah .. it was three to four inches long ... could it be a brown creeper after all? Hmmm ... and it flew away into the apple trees, so it didn't want my care ... I was glad it was feeling well enough to fly away ... poor bird .. and yeah, he hit my window.

Did he hit your window? Seems a bit large and plain for a house wren . Poor thing! Hope it recovered under your kind care !