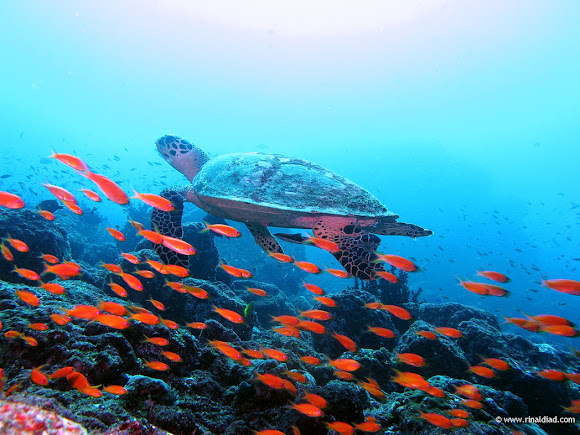 The hawksbill sea turtle (Eretmochelys imbricata) is a critically endangered sea turtle belonging to the family Cheloniidae. It is the only extant species in its genus. The species has a worldwide distribution, with Atlantic and Pacific subspecies. E. imbricata imbricata is the Atlantic subspecies, while E. imbricata bissa is found in the Indo-Pacific region. The hawksbill's appearance is similar to that of other marine turtles. It has a generally flattened body shape, a protective carapace, and flipper-like arms, adapted for swimming in the open ocean. E. imbricata is easily distinguished from other sea turtles by its sharp, curving beak with prominent tomium, and the saw-like appearance of its shell margins. Hawksbill shells slightly change colors, depending on water temperature. While this turtle lives part of its life in the open ocean, it spends more time in shallow lagoons and coral reefs. Human fishing practices threaten E. imbricata populations with extinction. The World Conservation Union classifies the hawksbill as critically endangered.[1] Hawksbill shells are the primary source of tortoise shell material, used for decorative purposes. The Convention on International Trade in Endangered Species outlaws the capture and trade of hawksbill sea turtles and products derived from them.

I wish I could favorite this one more than once! Truly beautiful and breathtaking!

such a beautifull image!

Hello and welcome to Project Noah! Nice shot! Since you have identified the species of your spotting by common name and have listed the species name Eretmochelys imbricata in the description, please transfer that latter name to the Scientific name. The scientific name is for use of the recognized "genus species" combination (nama ilmia berbentuk jenis spesies). Common names and descriptive comments should not be placed there. Thanks