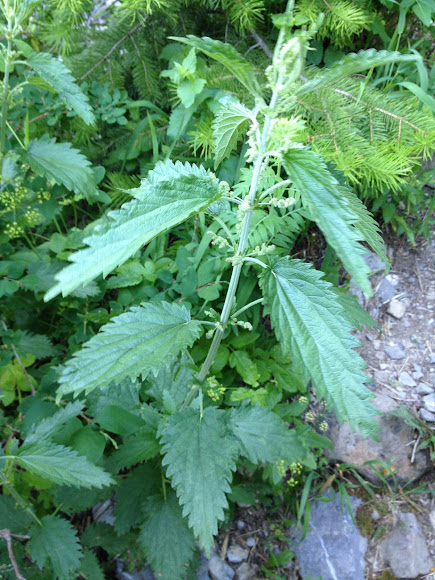 Urtica dioica is a dioecious herbaceous perennial, 1 to 2 m (3 to 7 ft) tall in the summer and dying down to the ground in winter. It has widely spreading rhizomes and stolons, which are bright yellow, as are the roots. The soft green leaves are 3 to 15 cm (1 to 6 in) long and are borne oppositely on an erect wiry green stem. The leaves have a strongly serrated margin, a cordate base and an acuminate tip with a terminal leaf tooth longer than adjacent laterals. It bears small greenish or brownish numerous flowers in dense axillary inflorescences.

In North America it is widely distributed in Canada and the United States, where it is found in every province and state except for Hawaii and also can be found in northernmost Mexico. It grows in abundance in the Pacific Northwest, especially in places where annual rainfall is high.

These are found everywhere there is a large amount of water during the year.