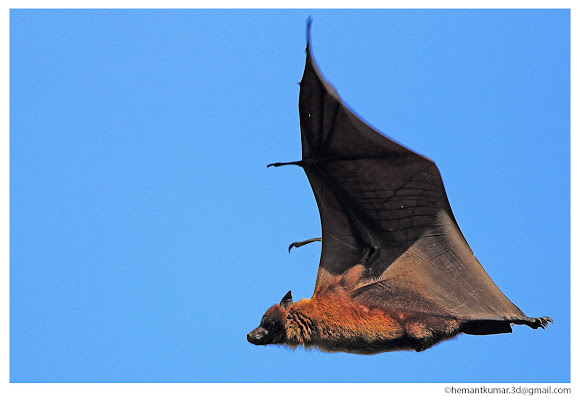 The Indian Flying-fox (Pteropus giganteus) is a species of megabat in the Pteropodidae family. It is found in Bangladesh, China, India, Maldives, Nepal, Pakistan, and Sri Lanka. Also known as the Greater Indian Fruit Bat, it lives in mainly forests. It is a very large bat with a wing span of between 1.2 and 1.5 m (3 ft 10 in and 4 ft 10 in). It is nocturnal and feeds mainly on ripe fruits such as mangoes and bananas and nectar. This bat is gregarious and lives in colonies which can number a few hundred. Their offspring has no specific name besides 'young'. They reproduce sexually and give live birth. They have one to two young.(http://en.wikipedia.org/wiki/Indian_Flying_Fox)

Congrats Hemant for the SOTD..!

The flying fox is nocturnal, having excellent night vision; it has no means of echolocation. They roost during the day hanging upside down in the tops of large trees in huge noisy colonies of many hundreds. In the evening they leave one by one on their nightly foraging, returning at dawn. Their food consists of the juices and pulp of fruits and flowers, having chewed the flesh, the solids are discarded.

Congrats on the SOTD!

WOW!! It is gorgeous!! Do not want to run into one or some! it would scared the daylights out of me!!

Awesome!
U should put it on the mission: Global Flight!

Actually they are found throughout most Asian areas, I am living in Borneo and we have them here, Its my favorite bat species and I am always in awe when I see them flying over my home heading to the fruit orchard, sadly they are targeted as some here for food and as a pest due to destruction of farmers crops like fruits. I grow fruit trees in hope they come to my place, so far only tiny fruit bats.

Congratulations Hermant on your SOTD

Hemant, congratulations! This awesome capture has earned you a well deserved spotting of the day!

Named for its physical similarity to a fox, the Indian flying fox is one of the largest of all bats with a wingspan of more than 4 feet.