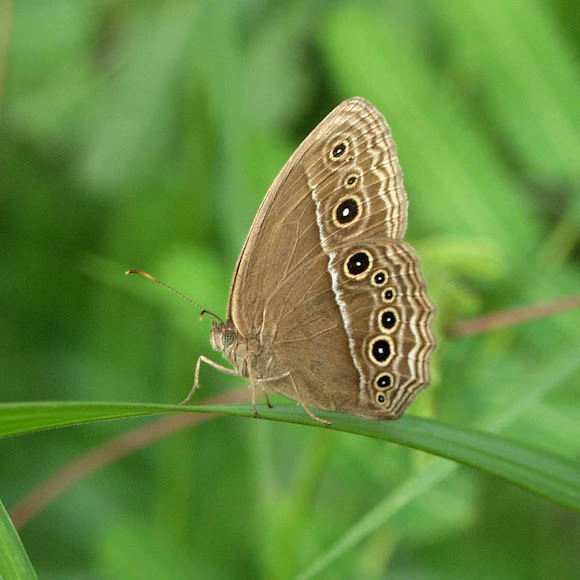 This is a very difficult butterfly to Identify for two reasons (from Wikipedia): Firstly, the differences between the male and female ocelli, where the posterior or rear most ocelli on the fore wing is larger in the female. Secondly, the shade of brown varies with the season, as does the size of the ocelli. In the wet season the ocelli are larger and more distinct. Unfortunately, I did not collect images throughout the year, something that I will endeavor to do over the coming year and also make a note of the season changes. One thing that has not been published, is how long it takes for the ocelli pattern to change. Update - 4 images deleted, one image added. Thanks to AgnesAdiqueTalavera for ID help.

Yes, Pam. In pics 5-6, the 4th spot is obviously mis-aligned with the first 3 spots below it. Unlike in pics 1-4, you can see the 4 spots are neatly aligned.

Agnus, you amaze me with your Bush Brown ID. I still can't see the difference! Is the 4th spot from the bottom out of alignment, the clue?

Hello.. Pics 1-4 are Mycalesis mineus - posterior four ocelli, not three as in Mycalesis perseus, are in a straight line (Wikipedia). Pic#1 - wsf, pics#2-4 nearing dsf, or dsf not yet fully adapted.

Pics 5-6 are M. perseus, both wsf - on the hind wing only the three posterior ocelli in a straight line, the rest strongly curved outwards (Wikipedia).

So much difference between these butterfies. No wonder we get confused!
Beautiful photos... thanks for the link.