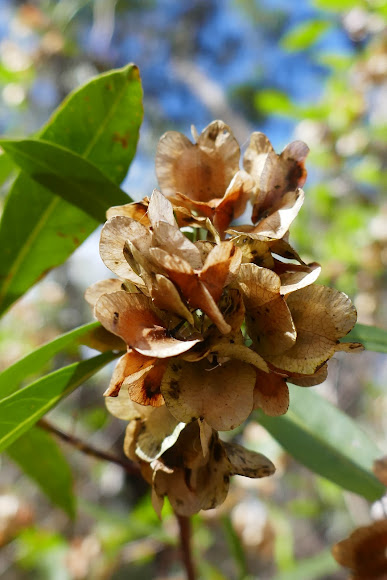 Colourful three-lobed seedpods that look like "winged" flowers are one of the characteristics of this species. The Sticky Hop Bush is an Australian native flowering shrub, and this particular subspecies is a member of the genus Dodonaea which has a very large, cosmopolitan distribution around the world, in tropical, subtropical and warm temperate regions. The Australian subspecies can grow from 2 to 6 metres, varying in size from upright shrub to small tree. It is often found growing beneath eucalypts as an understorey species, and depending on the conditions, can be quite spindly and straggly in appearance. It is very hardy and can endure periods of drought. Its flowers are rather inconspicuous, but its best feature is its colourful seed capsules, and they can vary in colour including green, yellow, red, pink and purple. Its flowers attract moths, butterflies and other insects, while its foliage provides a refuge for small birds. Wallabies are known to browse on the foliage.

In this region, mostly granite soils, and this section of track was quite exposed with a sunny aspect. We've also been enduring a drought, so the plants are looking rather sparse. However, there's plenty of new growth in the way of fresh leaves and fruit, so these plants are hardy and adaptable. Spotted along the Mt. Norman track in Girraween National Park. Here's some park info - http://www.rymich.com/girraween/

The Wikipedia link provide a great deal of information. One interesting local use - Aboriginal people chewed (but not swallowed) its leaves to relieve toothache. They also used the leaves to treat stingray wounds, by binding over the wound. Early settlers used the plants winged fruits to brew beer. The wood is also strong and durable.