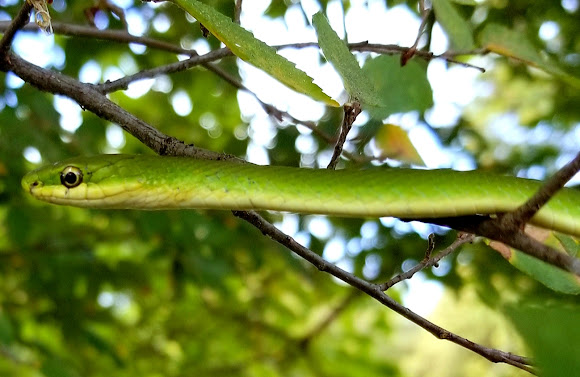 This is a medium sized snake in the family (Colubridae). The snake was about 3 feet in length and 1 inch in width. The snakes scales are bright green with the belly of the snake creme white. The eyes of this snake are golden with a black pupil. This species of snake is mostly arboreal and are found on trees like this one. This one was on an Elm tree, but their was another of the same species a couple blocks away on an American Ash tree. The snake also has a large moth and two small nostrils.

McCord park, Little Elm, Lake Lewisville Texas. The habitat that this one was in is entangled shrubs and vines including trees like Elm and Ash.

This species is an non-venomous Colubrid snake that is found throughout the Southeastern United States, from Florida, north to coastal Maine, Indiana, and west to Central Texas. The snake is commonly found in the Piedmont and Atlantic coastal plain, but is not found in the higher elevations of the Appalachian Mountains. It is also found in northeastern Mexico, including the state of Tamaulipas and eastern Nuevo León. Except the one in Florida is the sub-species aestivus carinatus.