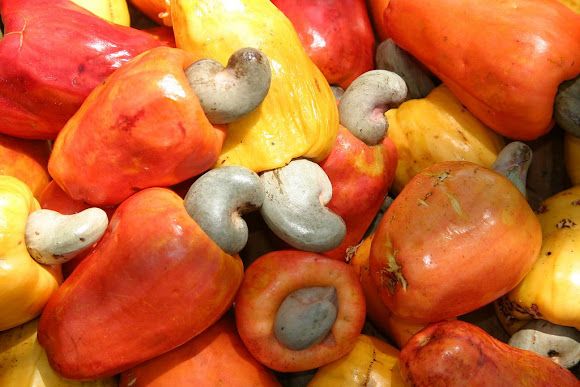 Interesting facts about this nut that everybody knows from cocktail parties: The Cashew-Tree comes originally from Brasil and Venezuela and was exported by the Portugueses to Africa, India and Asia in the 15th century. Actually the cashew is botanically not a "nut", but a fruit. And what looks like being the fruit is not the fruit but the fruit stem or pedicle. And it is to my modest knowledge the only "fruit" in the world where the seed is actually "outside the fruit"! Both, fruit stem, also called the cashew apple (marañon in Costa Rica) and real fruit, meaning the part that encloses the nut are edible, however, the apple is not transportable, so you will never get one in the stores. But be careful: The shell of the fresh fruit contains Cardol, a very caustic oil that may cause severe blistering sensations to the skin and burning of the eyes. Heat will destroy this harmful irritants, so after roasting the fruit can be peeled and eaten. However, this nutshell oil is very often used in industry, i. e. brake linings (!!), varnishes, inks and insulations. Some use the oil also against termite damages of timber. The flowers are pollinated by insects. The apples are eaten by birds and mammals (see coatis in the comment link), including bats. They usually carry the fruit away and leave the fruit untouched. So these animals play a key role in geographical dissemination of the cashew tree. Other animals like parrots, tapirs and other types of bats do obviously not care about the caustic covering to get the tasty nut. There are several extrafloral nectaries on different parts of the plant which attract ants, wasps and other insect and therefore protect the whole tree and its parts against insect pests. So this is an excellent example of biocontrol!

Thanks bayucca for the information, great photo.

Is one of my favorite fruits

nice, bayucca. I lived in a cashew orchard in Goa for many years...

Fascinating! I was intrigued to investigate more about cashews!

I had no idea what these even looked like in this form. Fascinating! Great info, too... nature is so awesome!

Thanks, Mark. Indeed a cocktail runner, but most people have no idea where they are comming from or looking like.

Excellent. Most people have no idea how this 'nut' forms... or that it's not even a nut.

Great information! I'll never see the cashews in the same way again... Will be a great conversation starter at a party where there are cashews!