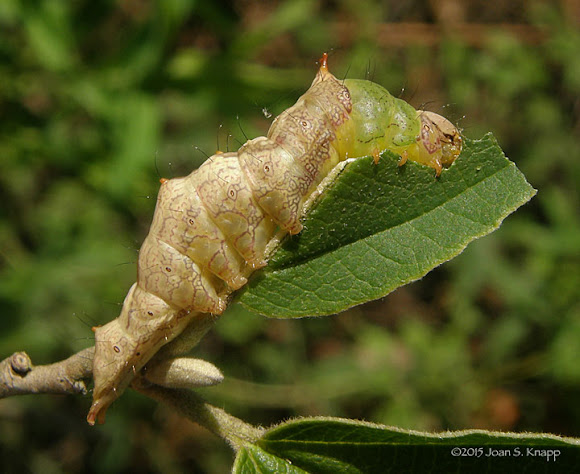 Distributed throughout the United States and southern Canada feed on the leaves of various woody plants, including Beech (Fagus), Birch (Betula), Elm (Ulnus), Maple (Acer), Morning-glories (Ipomoea), Oak (Quercus), and Rose (Rosa) species Can be found from May to October.

This caterpillar was approximately 1.5 inches long and was found on an ornamental witchhazel (Hamamelis sp.). I found another smaller caterpillar – approximately 1 inch long – on this plant. Schizura unicornis has a very similar caterpillar. The head stripes and humped A5 (fifth abdominal segment) of this species are listed as distinctive in Wagner (3) p. 314. S. unicornis – see http://bugguide.net/node/view/454269, also has a white V-shape over A6 and A7 which S. ipomoeae lacks.