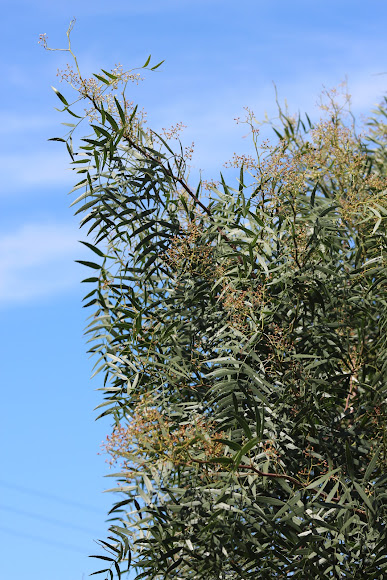 The shinus molle is native from the peruvian andes. In Uruguay we call them "anacahuitas" and they can frequently be spotted. They are quick growing evergreens that may grow upto 15 meters. They also have droopy branches with a high leaf density which redunds on a very wide tree crown which makes it difficult to photograph from near distances.

It has become widely naturalized. According to wikipedia: "S. molle is native to the arid zone of Northern South America and Peru's Andean deserts, and goes to Central Chile and Central Argentina. It has, however, become widely naturalized around the world where it has been planted as an ornamental and for spice production. S. molle is a drought tolerant, long-lived, hardy evergreen species that has become a serious invasive weed internationally. In South Africa, for example, S. molle has invaded savanna and grasslands and become naturalised along drainage lines and roadsides in semi-desert. It is also invasive throughout much of Australia in a range of habitats from grasslands to dry open forest and coastal areas, as well as railway sidings and abandoned farms. In the United States, either S. molle or its close relative Schinus terebinthifolius is particularly invasive in Florida and Hawaii, and can also be found in southern Arizona, southern California, Texas, Louisiana and Puerto Rico."