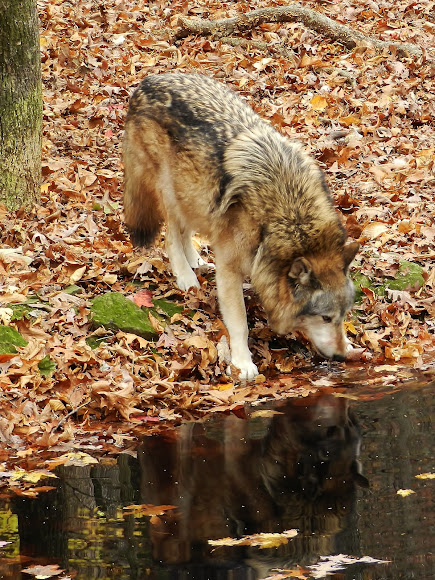 The gray wolf or grey wolf is a species of canid native to the wilderness and remote areas of North America, Eurasia, and North Africa. It is the largest member of its family, with males averaging 43–45 kg (95–99 lb), and females 36–38.5 kg (79–85 lb). It is similar in general appearance and proportions to a German shepherd, or sled dog, but has a larger head, narrower chest, longer legs, straighter tail and bigger paws. Its winter fur is long and bushy, and is usually mottled gray in color, though it can range from nearly pure white, red, or brown to black.

The gray wolf was once the world's most widely distributed mammal, after humans and lions, living throughout the northern hemisphere north of 15°N latitude in North America and 12°N in India. Deliberate human persecution has reduced the species' range to about one third, due to livestock predation and fear over attacks on humans. The species is now extinct in much of Western Europe, in Mexico and much of the USA. In modern times, the gray wolf occurs mostly in wilderness and remote areas, particularly in Canada, Alaska and northern USA, Europe, and Asia from about 75°N to 12°N.

This Grey Wolf is now 12 years old and lives along with 5 others in a wildlife park at Bays Mountain, TN.

Park Ranger informed me that this spring they hope to add three more younger wolfs to the park. They have six at present but they are all getting up in age. They range from nine to twelve years in age which is quite old for Grey wolfs.

What a beautiful wolf! Thank you for sharing this precious encounter!