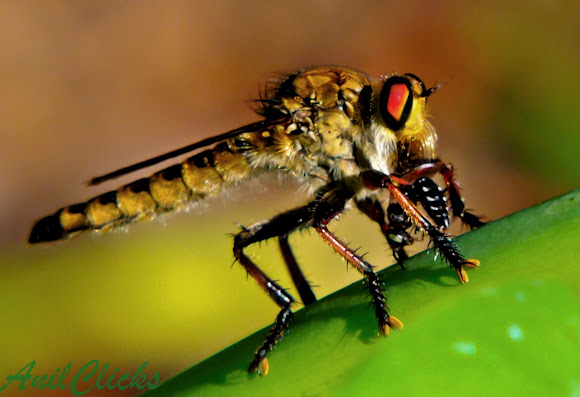 The Asilidae are a family in the order Diptera, the true flies. The common name for members of the family is the robber flies. The Asilidae are cosmopolitan, with over 7000 described species. Latreille was the authority for establishing the family in 1802.[1] The Asilidae, together with Bombyliidae and Therevidae, are the most representative families of the superfamily of Asiloidea and they form one of the most characteristic groups of the lower Brachycera. All robber flies have stout, spiny legs and 3 simple eyes (ocelli) in a characteristic depression between their two large compound eyes. They also have a usually dense moustache of stiff bristles on the face; this is called the mystax, a term derived from the Greek mystakos meaning "moustache" or "upper lip". The mystax probably affords some protection for the head and face when the flies deal with struggling prey; various Asilidae prey on formidable species including stinging Hymenoptera, powerful grasshoppers, dragonflies and even other Asilidae, in fact practically anything of a suitable size. Some Asilidae do however specialise in smaller prey, and this is reflected in their more gracile build. In general the family attacks a very wide range of prey, including other flies, beetles, butterflies and moths, various bees, ants, dragon and damselflies, ichneumon wasps, grasshoppers, and some spiders. They do so apparently irrespective of any repugnatorial chemicals the prey may have at its disposal.[2] Many Asilidae when attacked in turn do not hesitate to defend themselves with their proboscides and may deliver intensely painful bites if handled incautiously.

Thank you Shanna :) That clue was enough :)

Hi Anil, it's a Robber Fly but I'm not sure which species. Here is a spotting of a robber fly which appears to be the same species as yours on the 'India Nature Watch' forum - it doesn't have a scientific name on the picture, but there might be a scientific name somewhere else in the forum. http://www.indianaturewatch.net/displayi...