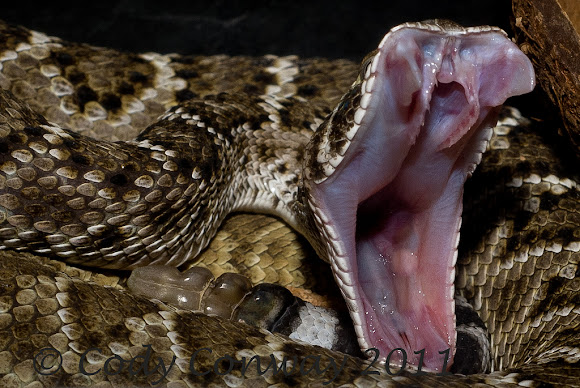 Venomous. Fast striking. One of the most common rattlesnake species in the Central US, but only the second most common species for human bite records in the US (Behind the Southern Pacific Rattlesnake in California at number 1). This medium bodied snake can be found in array of habitats including those occupied by humans. Though fatalities are not likely from a bite if proper care is treated, the utmost respect must be given when they are found in the wild. Back in March of 2008 I went to Sweetwater Texas to attend the rattlesnake roundup to document the horrendous slaughtering of thousands of snakes, looking for species accountability - i.e. hoping to find a protected Timber Rattlesnake taken in by mistake to push getting them shut down. During my time there I did an excursion into the Canyons where these rattlesnakes were photographed and one collected (with proper permissions and all licensing from the state). I proceeded to do a tour in Texas with 3 of the 4 deadly snakes to give ID classes to individual groups and organisations. Hopefully this show paid off in the end with the lives of harmless snakes being saved by proper ID.

Yep, these guys have no way to clear out the dirt and make a spot to go. They will use previous holes from small mammals, or find crevices in cliffs / canyons to dig themselves into.

Fantastic photographs. Learned something. Is it true the snakes do not make a hole they use existing ones?

Congratulations Cody! Your snake was chosen as the Project Noah - CSC snake spotting of the week for 01/05/2013!

Karen - It did for a very split moment, it was extremely patience timing for this shot. The fangs are exposed for a split moment. During a bite they usually get pushed back and unsheathed as part of the attack.

Fantastic Cody! Interesting to see that it did not unsheathe its fangs.

I use to do a lot of knowledge base information on my website portal. But I have since used my website to push my captive program I am currently focused on. I still do a class once to twice a year, with the occassional special guest as a favor, but it's very low key now. I did a lot of work with my local Audubon Chapter, did some radio apperances with Conservationist of the Year for Texas - Chester Moore, and did the Outdoor Program a while back on another station. I worked with a botanical garden on their research and education staff and that was my main guts for my programs. It gave me access to an audience readily available, support for running these programs, and tons of places to go for locating local species to use in these programs. reptileexperts.com is my current site focused on captive breeding - there will be a blog going up on there soon to focus on knowledge base.

I do something pretty similar out here in Arizona, and we have our commonly killed non-vens as well. I love it when someone lets knowledge prevail. Do you have a site for your efforts?

Thanks Bryan - I did get a few emails a while after the programs happened with people thanking me for saving the life of a speckeled kingsnake or Texas Rat Snake that they encountered in their yard by being able to ID it as non-venomous. Even those who have made mention of identifying a venomous snake in their yard, they simply called someone to help get it out without approaching it too close. So progress was definitely made!

Great stuff - I hope you're able to change a few minds in Texas.

Thank you Lisa, it's appreciated and an honor :-)

I have chosen this picture to be the PN-CSC snake spotting of the week! Congratulations!

Thanks Cody for posting this spotting of such a magnificent and misunderstood animal!

I shouldn't have to tell you this, but the third picture should be first! :)