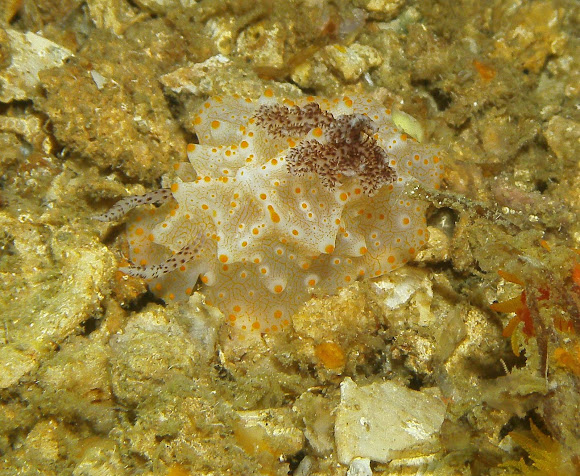 Halgerda batangas is a species of sea slug, a dorid nudibranch, a shell-less marine gastropod mollusk in the family Discodorididae. This animal is one of a group of mainly white species of Halgerda with orange markings. It is characterized by a network of fine, solid, red-orange lines on the mantle. It has a white band around the mantle containing low rounded orange-capped tubercles. The mantle tubercles range in size from small rounded bumps to tall, prominent structures.

yes it would be so much easier if it were kind of a slideshow of peoples spottings! and the missions are so hard to search too..

I certainly do know what you mean Marta and it does only take a few seconds to appreciate someones effort in finding and uploading spottings, it would be great to be able to have a slideshow of images instead of one by one as you say :-)

This is true Debbie, I wish there was a way to go back easier to see all for example last year postings without having to load one per one the pages..
But I think you know what I mean by my comment below and why it makes me feel frustrated..is sad, we should all be a bit nicer to each other, don´t you think? I think as a ranger I see this behavior from a closer "range" and it upsets me..

I definitely agree with you on this Marta, although sometimes there are that many spottings at once some just get lost in the mass!

Ay Madalena...because is not only a question of showing a nice picture here but also of being popular in project Noah..is just like a big high school, you know? You can see all the typical behaviors sometimes (competitivity etc). Me I don´t mind to like other peoples spottings...for a while I kept liking many spottings that were very pretty from another diver from Philippines here in Noah but over time I got tired that he never ever acknowledge back any of my spottings...and is not a question of people MUST like them but hey, when somebody likes one of yours it is also kind to once in a while at least leave a nice comment back in some of her/his spottings..but you know what? some people is just too self-absorbed..I find it a pity!..anyway, thanks for your nice comments :-)

this is so cool! why doesn't it have fav and comments??