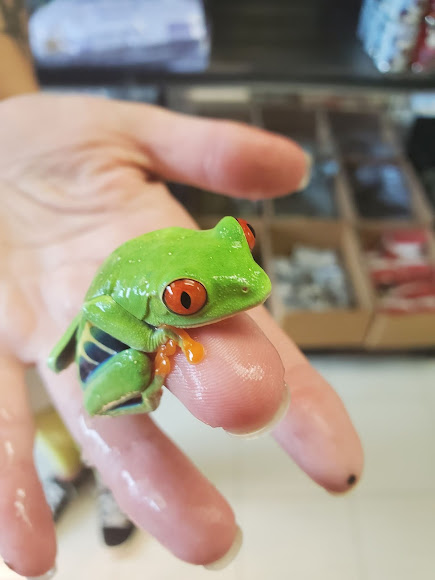 A male red eyed tree frog here at the Center. Females are much larger. I really love these guys. Such colorful and energetic creatures. I'm not the only one that thinks so. Their binomial name comes from the Greek words "kalos" which means beautiful and "dryas" which means tree nymph. Despite their vibrant colors, they're not exhibiting aposematism. Nocturnal, they hide during the day by closing their eyes, covering their sides and body with their hind legs and tucking thier feet under their body. In doing so they resemble leaves. In fact a red eyed tree frog that's active and one that's in camouflage mode is night and day. Another really cool thing they can do is called phenotypic plasticity where their embryos can hatch early in response to danger and flee as tadpoles. Most eggs are laid above ponds on both sides of a leaf. Even tadpoles that fall onto the ground instead of into water can survive 20 hours without water. That's a dedicated species to survival if I've ever seen one.

Native to Southern Mexico down into Central America. From Costa Rica to parts of Panama.

Cute...its so green and those eyes POP...

Looks like this little bloke went heavy on the make-up. Real cutie.