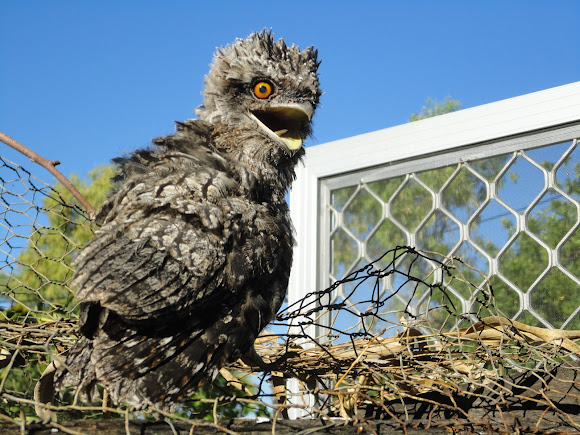 An Australian species of frogmouth, found throughout the Australian mainland, Tasmania and New Guinea. Quite often mistaken for an owl. Can grow between 35-53cm in length both males and females and as they are a bulky species they can weigh up to 680 grams. They make loud clacking noises with their beaks and emit a reverberating booming call. They hunt at night and roost on dead logs or tree branches during the day. They have excellent camouflage. The Tawny Frogmouth is almost completely insectivorous but on rare occasions has been known to feed on frogs and other small prey. The bird's large eyes and perfect hearing help with nocturnal hunting.

Almost any habitat, the tawny frogmouth can be found in habitats such as heath, forest, woodlands, urban and rural areas. It is unlikely to find a tawny frogmouth in treeless deserts and dense rainforests.

So cool. Looks like he's smiling. Lot's of personality in that bird!

OMG! Amazing photos! I don't know if it looks evil or just shocked!

Great shot and congatulations on NGSOW!!!

What a face!!!! Beautiful photo!

Congrats! It behaves in a very similar way to the Common Potoo of South America. Love that!

What an amazing little creature! I can imagine how those eyes could be mistaken for an owl! So cute! Congratulations on National Geographic Spotting of the Week!

Amazing capture Mikaela Richardson,congrats on the National Geographic spotting of the week and thanks for sharing

Congrats Mikaela, that's such an honor!! Wow, this is one of the most amazing birds I have ever seen!! Totally awesome!

Stoked on my recognition, so happy. Thank you everyone! :)

Wow! A huge congratulations Mikaela on your recognition. This is just wonderful :)

WOW!! I knew it!!! It is an amazing bird and you spotted it. Congratulation on the National Geographic spotting of the week. Regards, Gilma