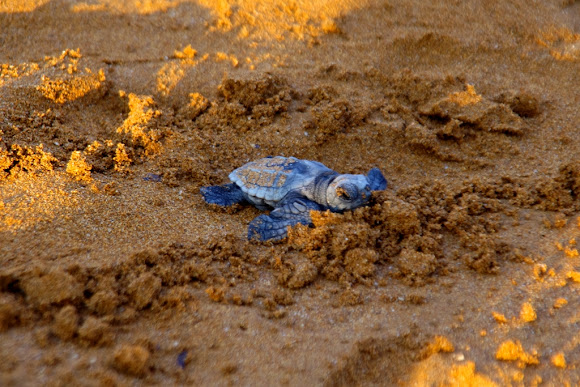 I spotted this reptile, on the beach Mia Lakkos, Soullaroi, Paliki, Cephalonia island, Greece. Came from the nest late afternoon. There were volunteers who helped to find its way to the sea. People who watched the scene had excited. Once entered the water began to swim. For some time he was returning around until eventually decided to open deep. Just one in a thousand turtles manages to adulthood. All of us wished to have a very nice and long trip! The experience for me was very exciting!

Red sand beach that faces south and has shallow waters.

It was the second time in my life I saw newborn sea turtle.

Our class thought this baby turtle was so cute! Thank you for sharing. It was exciting for us to see it.

Thank you very much Arlanda!!

Thank you very much MichalisXanthakis!! My pleasure!!

Thank you very much DanielePralong!!

Nice description and images Christos! we can feel your excitement!